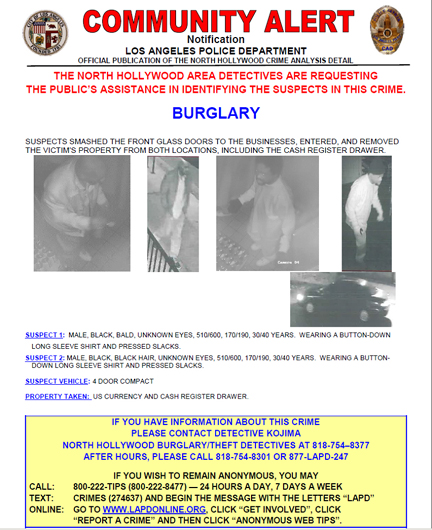 STUDIO CITY—The Los Angeles Police Department is asking for the public’s help to locate two suspects responsible for a string of restaurant burglaries in the Studio City region. LAPD North Hollywood Area Detectives have captured the suspect’s in action, who have struck at least nine restaurants in the area between September 2017 and February 2018. The duo last struck on Valentine’s Day at 3:40 a.m.

According to the LAPD Blog site, the suspects smash or break the front glass doors of closed restaurants in the early morning hours aiming to get their hands on cash registers. The nine restaurants that have been burglarized include:

Both suspects have been tied to other burglaries throughout Southern California in which their images were also captured on video. The first suspect is described as an African-American male, bald, 50-60 years of age, and standing approximately 6 feet tall and weighs around 170-180 pounds. The second suspect is described as an African-American male, approximately 40 years old, standing approximately 5 feet and 10 inches tall and weighing around 200-240 pounds. He has a large tattoo on his left forearm.

Tipsters may also contact Crime Stoppers by texting to phone number 274637 (C-R-I-M-E-S on most keypads) with a cell phone. All text messages should begin with the letters “LAPD.” Tipsters may also go to www.lapdonline.org, and click on “Anonymous Web Tips” and follow the prompts. Tipsters may remain anonymous.