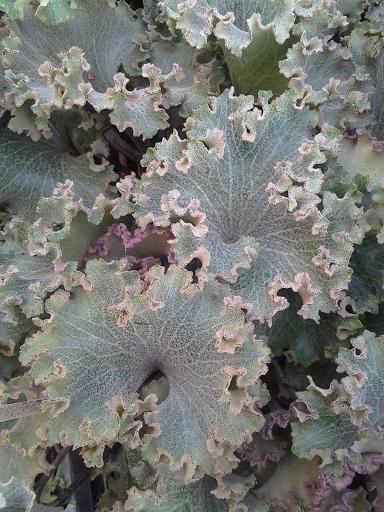 UNITED STATES—It is impossible to deny that the weather has been unusually cold when tough perennials like ligularia and farfugium express symptoms of frost damage. Late autumn and winter are expected to be cold, but not as cold as it has been recently. Ligularia, farfugium and most tough perennials should recover as if nothing happened. Cannas will naturally die back or need to be cut back to the ground later, but their resilient rhizomes should be safe, and regenerate later as winter ends. Unfortunately, sensitive perennials like pelargoniums may have been killed if frost damage extended too far into lower stems and roots.

The best way to protect plants from frost is to grow only plants that are not so vulnerable to frost. The problem with this technique is that it is too limiting. Abstaining from the few most sensitive plants like bananas and angel wing begonia probably would not be a problem for most of us. However, avoidance of moderately sensitive plants would involve familiar plants like bougainvilleas, lemons and split leaf philodendron.

Many of the smaller sensitive plants like angel wing begonia, can be grown in containers that can be moved to more sheltered spots if and when necessary. They can be brought inside or moved onto covered porches. If they only need to be protected for a few days during the coldest weather, they can be moved into garages. The problem with this technique is that many plants get too big for containers.

Bougainvilleas eventually get big, and do not like to be grown in containers anyway. They should be planted in warm spots in the garden not only because their foliage can be damaged by frost in winter, but also because they like warmth during summer. A south facing wall with an eave above provides a nice warm exposure, a bit of protection from frost above, and a slight bit of ambient warmth from the building behind it. Even if the foliage gets frosted, the main stems within should be safe.

During the coldest nights, sensitive foliage can be protected by burlap, paper, plastic or any sheeting suspended above by stakes or any light framework. With this technique, only exposed foliage or foliage that touches the sheeting will be damaged. It is unfortunately not practical to tent large plants like giant bird-of-paradise.

Even though it is unsightly, unprotected foliage and stems that get damaged by frost should not necessarily be pruned away immediately. This damaged foliage insulates and protects sensitive stems below. Besides, such early pruning can stimulate new growth that will be even more sensitive to frost later.

There are so many excellent ligularia to choose from. Crested ligularia is not one of them. Although it is an excellent and distinctive perennial, it is not really a ligularia. It is Farfugium japonicum ‘Cristata’ (which actually sounds more like a hybrid of a Volkswagen and a Toyota). The slightly fuzzy and coarsely ruffled rounded leaves form grayish green mounds more than a foot high and wide. Gold trusses of small daisy flowers bloom late in summer or early in autumn. Regular watering and partial shade keep foliage full. Harsh exposure can discolor foliage during the warmest summer weather. Frost is not often a problem.