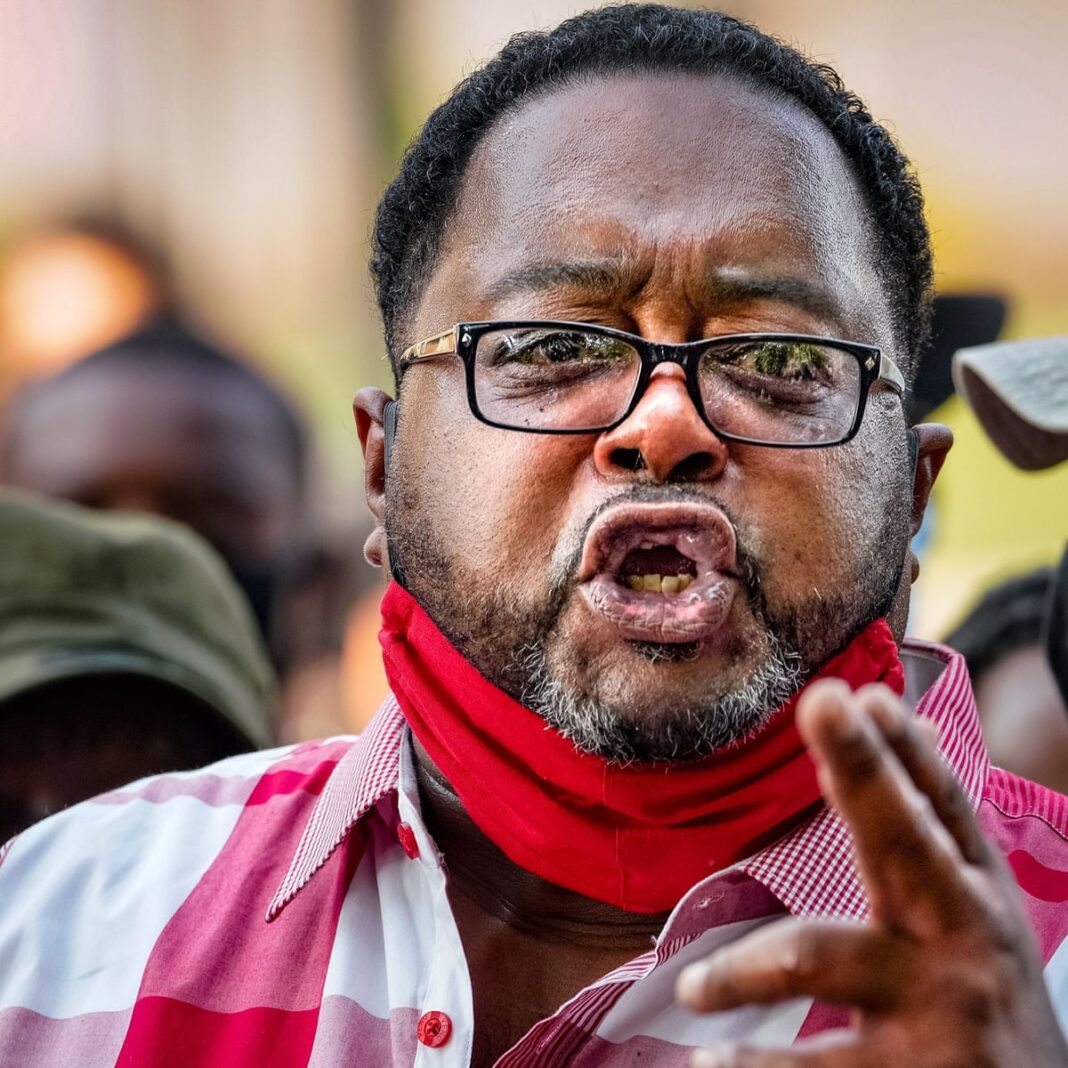 KENOSHA—The name, Jacob Blake, has been screamed all over the nation by Black Lives Matter demonstrators. They demand, “Say his name!” and they go on about as if they know exactly what went down in Kenosha, WI last month. He has become yet another poster child of Black Lives Matter.

Jacob Blake, 25, was shot 7 times after he assaulted officers with a knife, held one in a headlock and then proceeded to reach into his car where there was a gun and 3 small children waiting.

As you were misinformed, Jacob Blake was not some hero who broke up a fight between two women. That was a lie to misguide you into thinking this was yet another poor innocent man shot because he was black.

Jacob Blake is a perpetrator who had raped, assaulted and abused the mother of his children while her child laid next to her. The same child that was watched Blake assault the officers.

The victim called 911 on Blake. She was upset and told police that he took her kids and he is not supposed to be there. Blake had an outstanding arrest warrant for violent crimes. Blake had also assaulted police officers before while possessing a firearm.

Officers had less than one second to react. Their actions are judged over the course a trillion seconds by people that have no idea.

It is easy for us to judge. We are ignorant to the boundaries of their job and the reaction of trying to arrest a dangerous felon, who doesn’t want to go to jail.

Jacob Blake doesn’t fall too far from the tree. His father, also named Jacob Blake is a real gem (sarcasm). Neither one of them deserve an ounce of respect or consideration. In fact, he doesn’t even deserve to live in a free society. Both men should be thrown into jail and the key should be tossed.

Apologies for referring to Blake, Sr as a pig… because pigs are amazing intelligent animals. This man is a piece of trash. Not only did he raise a son to disrespect and rape women, abuse children, fight police officers and disrespect the law while putting his own children in the line of danger, but also to deny responsibility for his criminal actions. To top that off, he even lies for his son, calling him a victim and expecting people to give them millions of dollars while demanding the arrest of innocent police officers that could have lost their lives that day.

Listen, I don’t care if you hate the police. They are doing a high risk dangerous job and protecting citizens. They, like everyone else, have bad people in their group. However, the majority of them are amazing.

I would never justify the actions of Derek Chauvin, in the killing of George Floyd, or the other times where a man was killed by no fault of his own… However the only ones I know of are non-black people victimized and those don’t get any media attention. 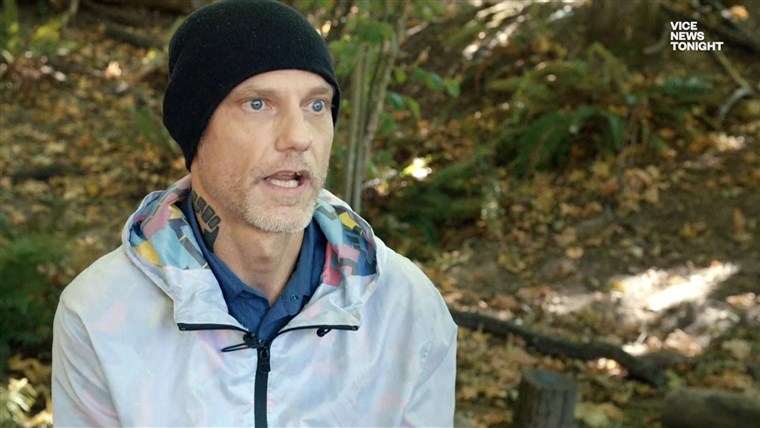 For example the Black Lives Matter demonstrator, Michael Reinoehl had killed Trump Supporter, Aaron “Jay” Danielson earlier this week in Portland. Reinoehl was killed while resisting arrest Thursday. Barely anyone is protesting that officer involved shooting. Is it because he is white and it doesn’t fit the narrative. He even had a BLM logo tattooed to his neck.

More police officers get injured and lose their lives than black people do… because of criminals like Jacob Blake. The police do not need to tolerate risking their lives by arresting a suspect at any time. If the suspect fails to cooperate or resists, getting shot should be expected and praised. The police officer should get a medal for being forced to face a threatening and dangerous situation.

Officers on duty deserve respect and cooperation at all times. Even if you are trying to escape them because you don’t want to do jail time for their crimes. 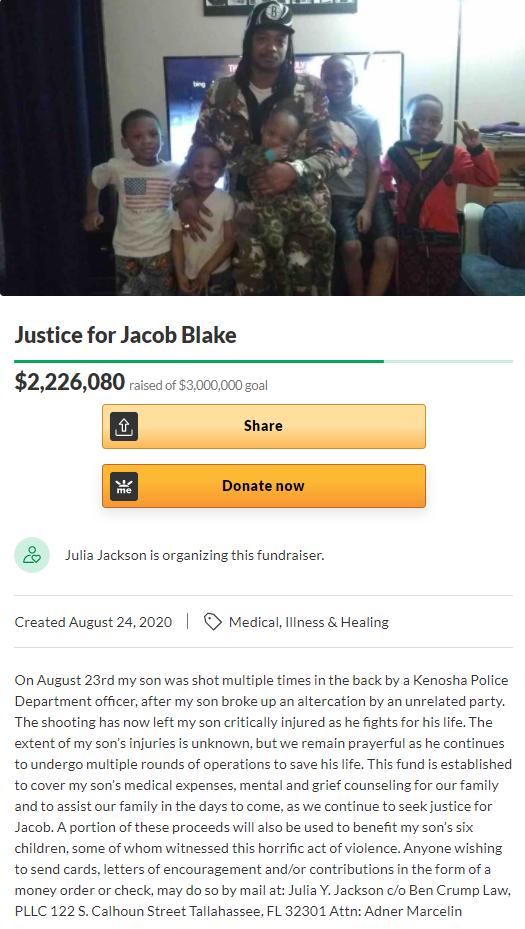 Jacob Blake, Sr and Jr is a newly made multi-millionaire because of your white guilt pathetic donations. Meanwhile the mother of his children, his victim has nothing. This pandering is only supporting more episodes of these morons trying to taunt the police. Blake Sr made a fool of himself and showed the world what a racist piece of trash he is. Not only that, he honors Farrakhan who is one of the worst most hateful racist icons of the African community. Farrakhan, like the Blakes, is racist monster, creating hate and divide everywhere by the ugly bigoted words.

The anti-semetic and racist Kenosha resident held a press conference in front of a bunch of slimy brown-nosers who simply want to spread their political divide and black power while they patronize someone that should be ignored. His self-entitled arrogance as if we should pity your situation is nothing more than than a failed attempt to cover your corruptness.

The media adds to it. Which is always funny how CNN and the others always say how they have to fact-check Trumps jokes who is probably the most honest politician ever allows such a blatant lie which gives attention and power to these crooks.

As Blake speaks in front of a large crows, spitting his germs (both literally and figuratively) he refers to his son being the victim of attempted murder (what a bleeping joke!), calling for the police to be prosecuted. Meanwhile he is not respecting the social distancing guidelines.

The only racists in Kenosha is the Blake family and their supporters. The police are working very hard to protect people like the victims of Jacob Blake from the perpetrators that have stupid parents (like the Blakes) who raise their kids to disrespect honorable people and to do bad things.

There is one happy ending to this tragic story. Blake, jr. will most likely be paralyzed from the waist down. This might make him think twice before assaulting anyone.

When will this country wake up and call things like they are? The only systematic racism that I have seen in 2020 are those like Jacob Blake, racist against white people.

Read my article on Breonna Taylor. You will be surprised how much the nation has lied to you on that one! She was no victim.

Note: Canyon News is an unbiased newspaper that publishes honest news without any slant or biased and allows freedom of speech and opinion without censorship under Point of View. Even though this is a Point of View article it is based on honest facts… facts you won’t read about in mainstream media. 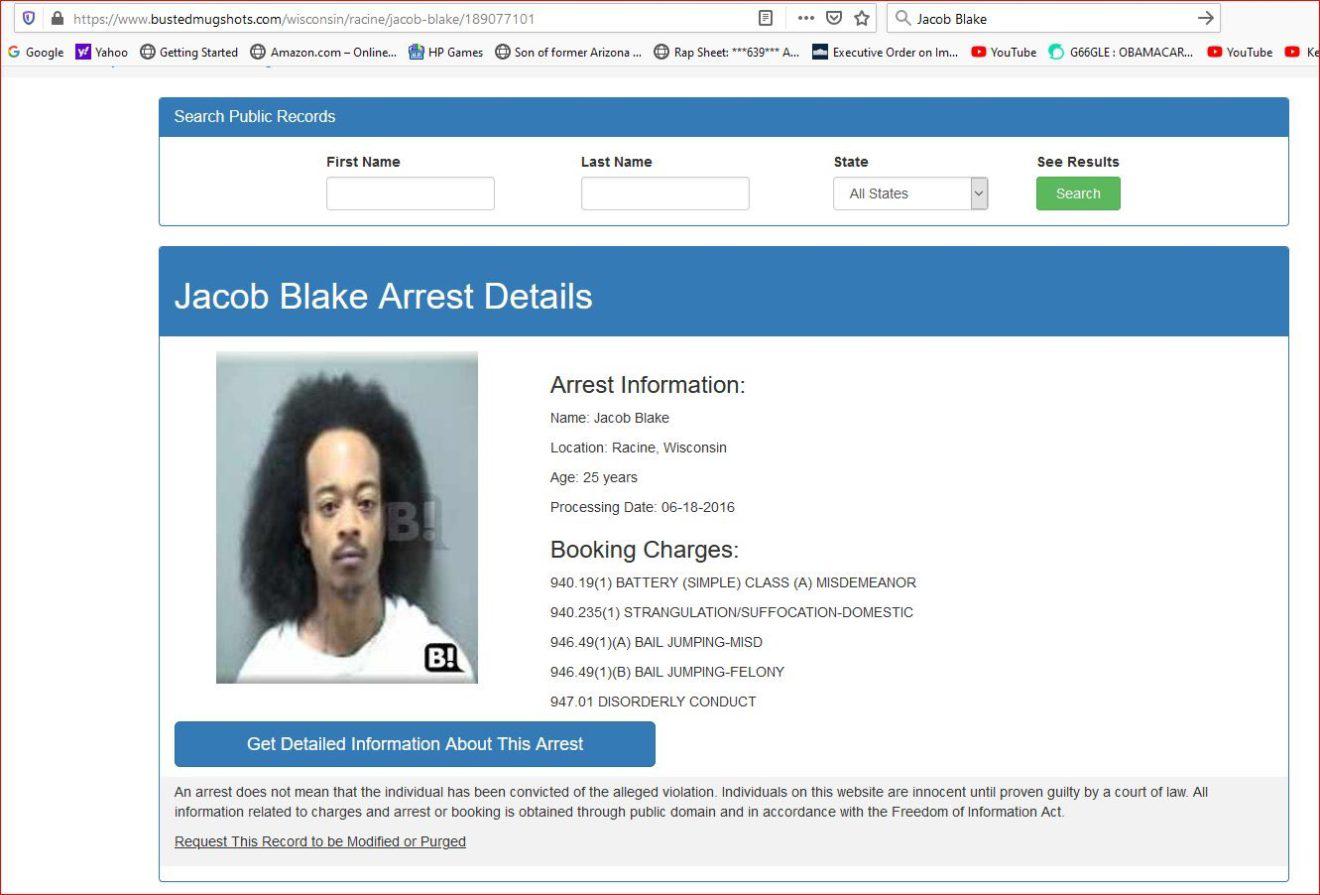 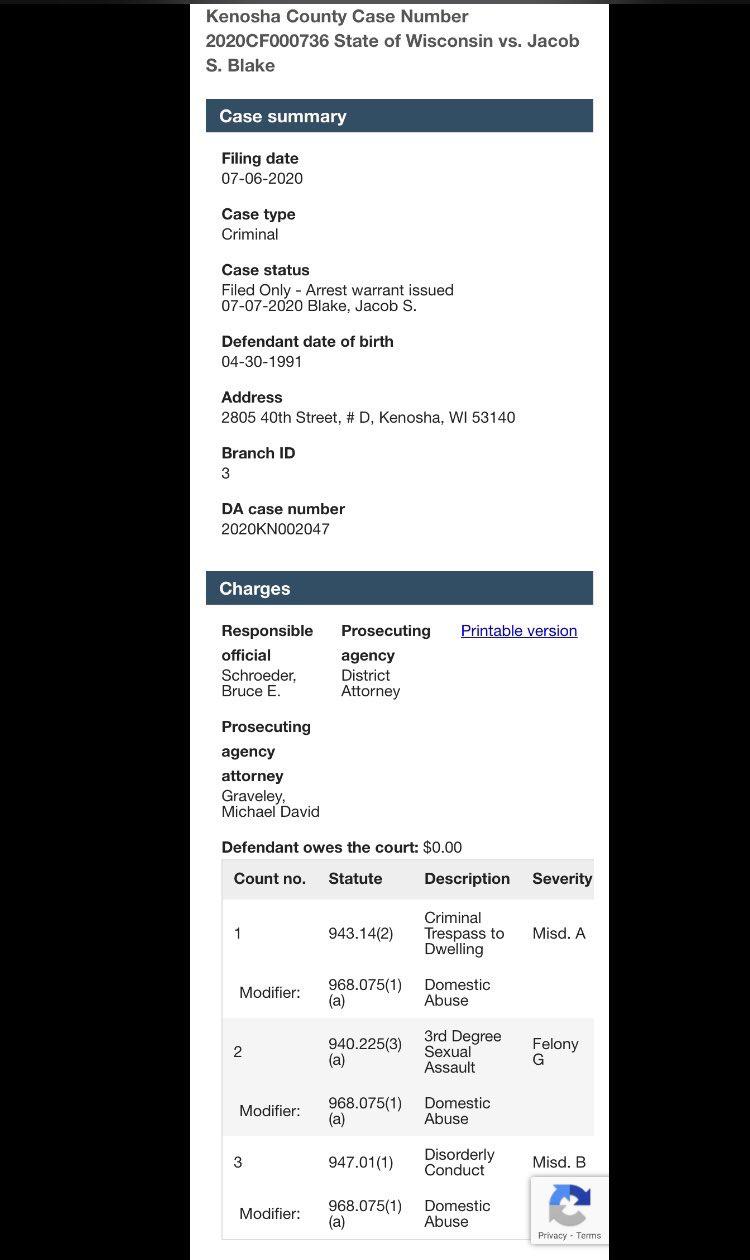 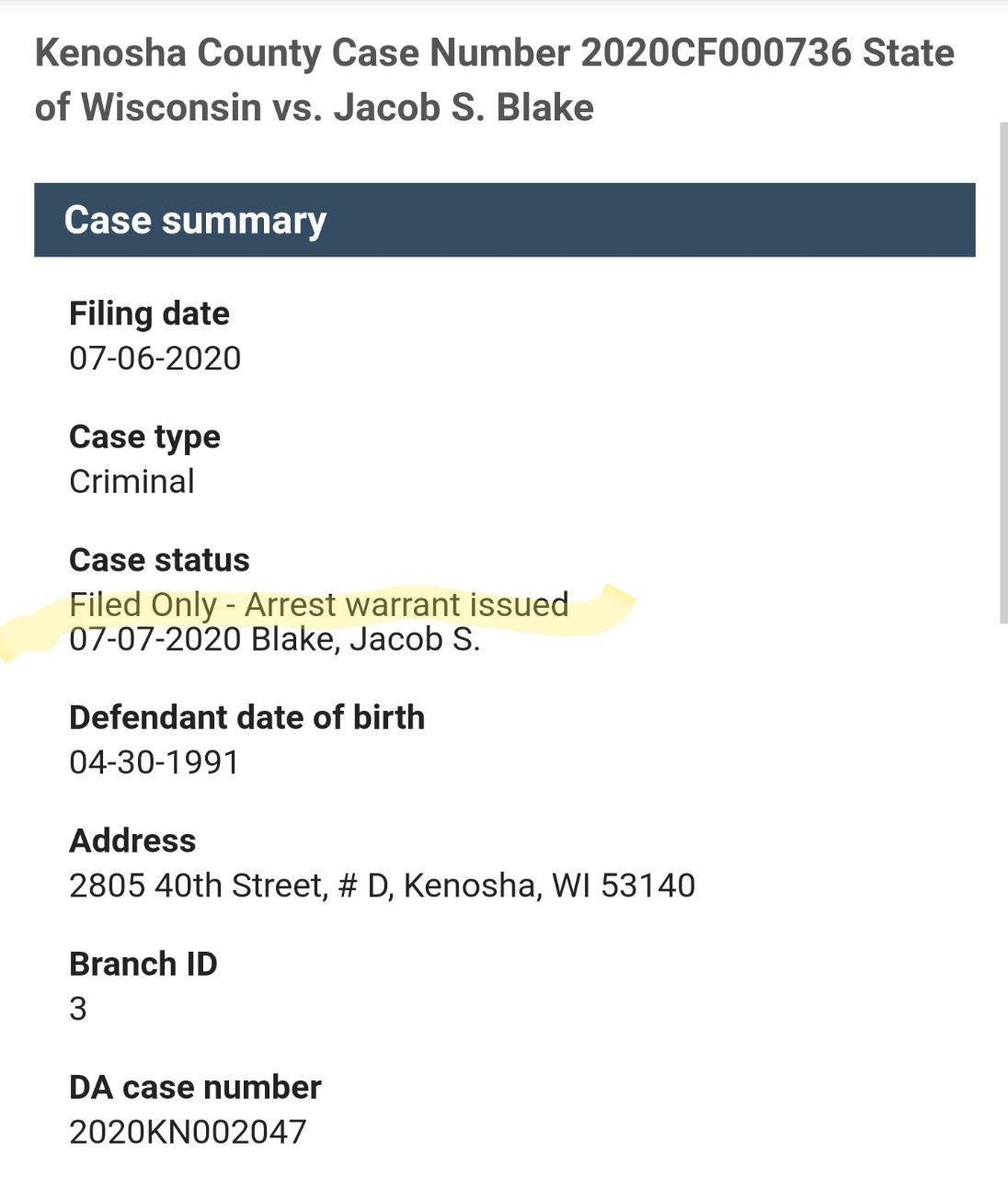