HOLLYWOOD HILLS— The Tonight Show host Jimmy Fallon has recently made an apology for a resurfaced Saturday Night Live Sketch in 2000 that involved him wearing blackface to portray African-American comedian Chris Rock.

Although Saturday Night Live has had many notable black female and male cast members throughout the years, the show has a history of casting non-black actors to play black roles. Naming a few, Billy Crystal played Sammy Davis Jr. in a 1984 sketch and Fred Armisen played Former President Barack Obama in 2008 and 2009.

In a 2013 interview with TV Guide, current and longtime cast member on SNL Keenan Thompson was asked why there were no black female comedians since Maya Rudolph left the show in 2007. His response, “It’s just a tough part of the business,” he answered. “Like in auditions, they just never find ones that are ready.” He was also asked by TV guide what the show would do if they needed to spoof an African-American woman. Thompson replied, “I don’t know.” Adding, “We just haven’t done them. That’s what I’m saying. Maybe [Jay Pharoah] will do it or something, but even he doesn’t really want to do it.” The cast has since been joined by three black female cast members, only one of which is currently on the show.

Fallon sent his apology through a Twitter post stating, “While on SNL, I made a terrible decision to do an impersonation of Chris Rock while in blackface. There is no excuse for this,” he added, “I am very sorry for making this unquestionably offensive decision and thank all of you for holding me accountable.” 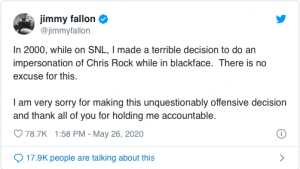 The sketch can no longer be found on the Saturday night Live’s website, but can still be found on YouTube.