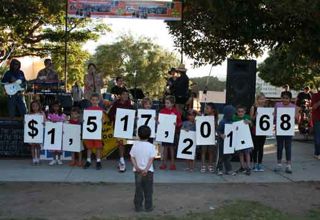 SANTA MONICA—On August 15, the Santa Monica-Malibu Education Foundation’s Save Our Schools Campaign had met their deadline for fundraising.  The group’s aim was to raise as much money before the mid-August date to contribute to the restoration of as many school district jobs as possible.  As of August 15, the group had garnered over $1.5 million, restoring 19.75 positions.

On May 25, a fundraising initiative to protect the school district from state budget cuts failed to pass the 2/3 required vote.  As a result, in June, the Santa Monica-Malibu Unified School district was forced to cut $7.1 million in funding.  These cuts included the elimination of 65 teacher and other staff jobs for the 2010-2011 school year. The actions of the school district stirred up controversy and caused major upset within the community.

As a reaction, the Education Foundation began the 60-day Save Our Schools campaign.  The campaign was geared towards raising funds to maintain jobs and class sizes as well as to restore extracurricular staff positions for library and music programs.

At the time of the cuts, the Board of Education had voted to approve donations from the foundation to fund staff jobs for the upcoming school year. The actions of the foundation, the volunteers and donors, have contributed to the restoration of around 20 school district positions. The Board of Supervisors had approved the job restorations last month; however, the money raised by the group will now cover part of the cost thus alleviating part of the city’s monetary stress.  The positions saved include 9.5 elementary classroom teachers, 2.5 elementary music teachers, four elementary library coordinators, 1.75 secondary counselors and two secondary classroom teachers.

Linda Greenberg Gross, executive director of the foundation, issued a response to the campaign results on the group’s website.  “This, combined with the estimated 10 positions replaced with anticipated Federal funding, means our children will have smaller [a] class size, secondary counselors, a fully-restored elementary music program, and libraries open every day of the week at each elementary school.”

School District officials will find out the exact amount of federal funding next month and will receive the money in November.  Until that time, Save Our Schools continues to accept donations through their website at smmef.org/saveourschools.php.