UNITED STATES−On Friday, August 14, the Washington D.C. Circuit Court of Appeals overturned a lower court ruling requiring that former Secretary of State Hillary Clinton provide a sworn deposition regarding her use of a private email and server from 2009-2013 when Clinton served as Secretary of State.

At the end of a 25-page court ruling written by D.C. Circuit Court of Appeals Judge Robert Wilkins, who was appointed by former President Barack Obama, the case was dropped completely,  preventing Clinton’s email records from being exposed as requested in a Freedom of Information Act (FOIA) suit brought against SOS by Judicial Watch.

The court ruling grants Clinton amnesty from the email records being exposed to the public and rather Clinton was involved in the death of four Americans killed in Benghazi.

“Former Secretary of State, Hillary Clinton has answered countless media inquiries on the matter.  The facts underscore both the impropriety of the District Court’s order and the appropriateness of turning the page on the issue,” said Judge Wilkins.

Judge Wilkins stated in conclusion, “For the reasons set forth above, we grant the petition for mandamus as to Secretary Clinton, deny it to as Miss Mills’ petition for lack of jurisdiction and remand the case for proceedings consistent with this opinion, So Ordered.” 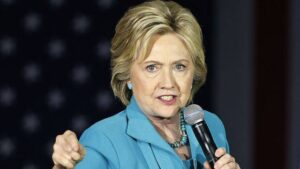 The D.C. Circuit Court ruled 3-0 that the group, Judicial Watch was not entitled to the disposition connecting Clinton with an 8-year-old case involving a Freedom of Information Act (FOIA) suit filed by Judicial Watch. They requested records and details discussed during the 2012 interview between Secretary Clinton and National Security Advisor, Susan Rice regarding the attack on U.S. facilities in Benghazi on September 11, 2012, that took the lives of, U.S. Ambassador, Christopher Stevens, Glen Doherty, Tyrone Woods, Sean Smith in a planned terrorist attack in Libya after repeated communications and requests and calls for help that remained unanswered.