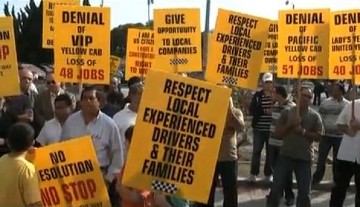 The decision, made by Judge Robert O’Brien, restrains operation of the franchising plan until January 7. The lawsuit, filed by the newly-formed Taxi Drivers Association of Santa Monica, was issued the previous day, on Tuesday. The TDASM is comprised of Armenian-American taxi companies and drivers.

“We are very pleased to announce that our effort on behalf of the Armenian-owned and operated taxi cabs in Santa Monica has led to victory in the first legal hurdle,” said attorney Nora Hovsepian, Community Relations Chair at the Armenian National Committee of America, Western Region, in a statement released by the Armenian Youth Federation.

Hovsepian and Serouj Aprahamian, executive director of the Armenian Youth Federation, both raised the question of possible discrimination at the approval hearing.

“It is incumbent upon us to continue standing in solidarity with those fighting for a fair, more inclusive awarding of taxi franchises in Santa Monica,” said Aprahamian.

On January 7, city attorneys will be required to explain why the court should not grant the preliminary injunction. The Santa Monica franchise cab system was created with the intention to curb the number of cabs in Santa Monica.