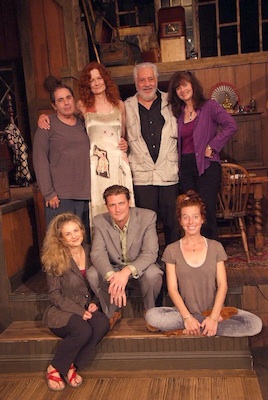 “Just 45 Minutes From Broadway” had a spectacular run in Santa Monica. So much so, that playwright, Jaglom has put his wonderful and fascinating characters on film. “Just 45 Minutes” will be making its big screen debut in 2011, with Rainbow contract player Frederick leading the way to another great performance with an ensemble that is unparalleled in theatre history. David Garver is going to become a huge star competing with the likes of my friends Leo DiCaprio and Will Smith, Salinger is sublime as the diva mother who shows love for her family in the face of all challenges, Julie Davis belongs to the ages, as she proved with her award-winning film “Finding Bliss,” Harriett Schock a best-selling songwriter makes the audience laugh, Jack Heller is unforgettable as the family’s patriarch and David Proval is nothing short of a force of nature both on the big screen, small screen and on stage. Santa Monica resident and star Tanna Frederick tells Canyon News,“I’m very excited to be doing the play with the rest of this amazing cast at this venue, which is reopening just in time for us. I hope to see you there!”

For those who may not have had the opportunity to see this great team together, or for those who miss the play as I do, here’s your last chance to see this ensemble perform on stage in Los Angeles in this play. Jaglom’s respect for theatre families is evident in this most critically acclaimed piece of art.

This remarkable production is made possible by the very generous cast, crew and author who are donating their participation and looking forward to visiting Cambria; and by the active support of Cambria Fire Chief Mark Miller and the entire Cambria CSD. Jim Buckley, PPP Artistic Director, organized this special event and bids everyone to welcome and enjoy this charming show and the talented performers in our “land of incessant delight.”

Performances are scheduled from September 3-5, all at 7:30 p.m. Tickets $20/18. All proceeds benefit the PPP’s Sprinkler Loan Fund (not-tax deductible).

The Playhouse Lounge is open for refreshments before, during intermission and after the performance.

The Pewter Plough Playhouse, known as the “Jewel Box of Community Theatres” for its unique charm and distinctive atmosphere, a cultural and entertainment treasure for the past 33 years, is located at 824 Main St., at Sheffield Street, in Cambria’s West Village.

Photographs are Courtesy: Tanna Frederick by Paul Smith Photography and Group/Ensemble “Just 45 Minutes” by Rainbow Theatre Company, West Hollywood
DISCLAIMER: This article was a contribution made by an outside agency or person. The content has not been verified by Canyon News. Please exercise your due diligence prior to relying on this article for factual information. Canyon News is not responsible for the views, words, and opinions of contributors.

Malibu Voters May Be Able To Choose Their Mayor