When Harris arrived in Guatemala she was greeted with signs that read, “Kamala Go Home” and “Kamala Mind Your Own Business.”

President Giammattei indicated he did not have a good rapport with the Biden administration.

Harris advised Guatemala’s “who are thinking about making that dangerous trek to the United States-Mexico border;  do not come. I believe if you come to our border, you will be turned back.” 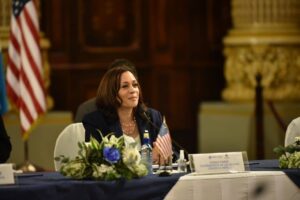 In March, President Joe Biden appointed Harris to lead immigration efforts for the U.S. The Vice President has faced scrutiny for not visiting the border in over 70 days. A majority of immigrants to the U.S. border are from the northern triangle including the countries of El Salvador, Guatemala, and Mexico.

Harris has blamed climate and food deprivation as the root causes of the migrations.

She represented the border state of California as a U.S. Senator before becoming VP.  The Biden-Harris ticket included open borders on their Presidential campaign platform and worked to change the language used to describe an individual who entered the country illegally.

Illegal immigrants and illegal alien have now been dubbed derogatory terms by the Biden administration.

Immigration and Customs Enforcement noted on their website in 2020, ICE Enforcement Removal Operations (ERO) resulted in 4,360 criminal arrests, 4,479 charges, and 5,397 convictions. In addition, 122,233 detainers were issued. The subject of these detainers had criminal histories including 1,900 homicide-related offenses, 3,600 robberies, 42,800 assaults, and 11,900 sex crimes.

On May 10, reports surfaced that the U.S. government is flying immigrants to various cities throughout the country on the taxpayer dollars.

On June 5, Canyon News received a tip that an airplane full of unaccompanied alien children (UACs) were flying into Bessemer Municipal Airport reportedly on Barry’s Aviation paid for by the U.S. Government.

Canyon News reached out to Governor Kay Ivey’s office, Rep. Mike Roger’s office, and other with state officials and the ICE tip line, but did not hear back before print.