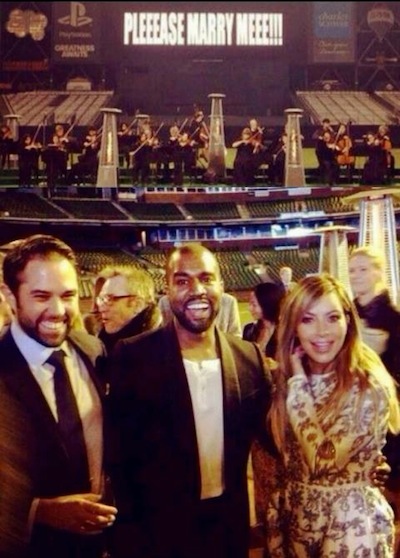 SAN FRANCISCO—Kanye West and Kim Kardashian are officially engaged after West popped the question with a 15-carat ring at AT&T Park on Monday, October 21.

Rapper Kanye West, 36, rented out AT&T Ballpark Stadium and surprised the reality TV star and mother of his child by popping the question on her 33rd birthday, according to reports.

Kim K. posted on Instagram a resounding “YES!!!” with a picture of her hand donning the 15-carat diamond ring by celebrity jeweler Lorraine Schwartz and “PLEEEASE MARRY MEEE!!!” flashing up on the big screen scoreboard in the background.

Yeezy, who flew in earlier from Los Angeles after presenting at the 17th Hollywood Film Awards, reportedly sought permission from matriarch Kris Jenner for her daughter’s hand in marriage before proposing. Kris, who ecstatically tweeted “Best night EVER!!! #happilyeverafter” and “GRAND SLAM!!!!!!!!!!!!!!!!!!!!!!!!!!!!!!!!!!” appears to have granted West permission.

With the entire Giants stadium seemingly to themselves, West got down on one knee in the middle of the baseball field and asked Kim to marry him. After she said “yes,” close friends and family rushed out of one of the dugouts and joined the newly engaged couple to celebrate.

The extravagant birthday surprise included a 50-piece orchestra that played  “Young and Beautiful” by Lana Del Rey and “Knock You Down” by Keri Hilson and fireworks and Roman candles that exploded into the night sky, according to E! News.

This will be Kim K.’s third marriage and Kanye’s first. The couple publicly came out as a couple at the 2012 Cannes Film Festival and welcomed their daughter,North West, four months ago in June.

Kim’s last marriage with NBA player Kris Humphries lasted 72 days in 2011. Their divorce was finalized in June of this year. Her first marriage was to music producer Damon Thomas, which lasted from 2000 to 2004.