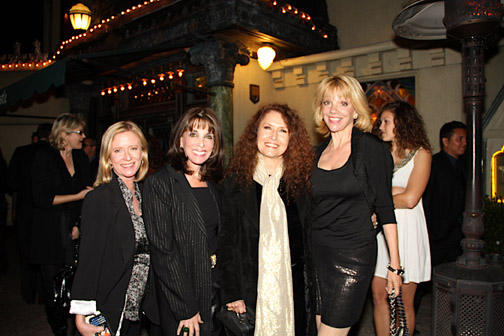 HOLLYWOOD —Keeping up with Kate Linder is one of the toughest things to do in this town. The beautiful star of “The Young and the Restless” is not only starring on the hit soap opera, but she’s also doing a play “Bedroom Secrets” at the Secret Rose Theatre in North Hollywood. She’s also flying the friendly skies as a flight attendant, which she admits gets fans of the number one daytime drama excited when they see her. “Tommy, it’s like a family reunion. Only thing, the fans and viewers of our show know more about what is going on in Genoa City often times better than I do. They want to know about Mrs. Chancellor, they ask about other characters and also Maria Arena Bell, our show’s executive producer and head writer,” said Linder.

Last week we reported Emmy-winner Peter Bergman, who plays Jack Abbott on “Y&R” attended “Bedroom Secrets” and surprised Kate. Also, recently “Y&R” actress Emily O’Brien, who portrays the ever suffering Jana Fisher, also surprised Kate by showing up to support her work in the play. “It is always an honor to see my ”˜Y&R’ costars. Emily didn’t tell me she was coming either,” said Kate.

Stars recently attended the popular New York open mic show, known as “Cast Party,” when it arrived in Los Angeles last week for the West Coast premiere at the famed Magic Castle’s Cabaret at the Castle. With a star studded cast and audience, we just knew Kate who plays Esther on “Y&R” would be amongst the beloved guests. “Cast Party” is the ultimate spot to mix and mingle with talented show folk and their fans. The buoyant, sharp and charming Caruso guides the entire affair like a bubbly cruise director, a musical genius Billy Stritch holds court at the ivories, and the audience is invited to participate in the festivities. Kate adds, “If anyone comes, I advise them to bring your music, in the right key!”

Also in attendance were Eve Plumb, Melissa Manchester, Teresa Ganzel and Emmy-winner Cybill Shephard. Linder couldn’t tell any “Y&R” secrets, but did conclude, “I am very honored to be a part of the number one show and Maria Bell is doing a fabulous job helming the show. There are lots of great storylines coming up. Stay tuned.”

On Wednesday, I caught Kate chatting with former Vice President Al Gore at the TV Academy Honors celebration.  Are you as exhausted as I am yet?