LOS ANGELES−Actor, Keith Lawrence Middlebrook, 53, was arrested on March 25, by the Federal Bureau of Investigations (FBI) after allegedly selling a fake cure for the Coronavirus.

The U.S. Department of Justice indicated in a press release Special Agents arrested Middlebrook on federal charges for allegedly soliciting investments in a company that would market a pill that would prevent COVID-19. In addition, an injectable would be used to treat patients who had already been infected with the virus. 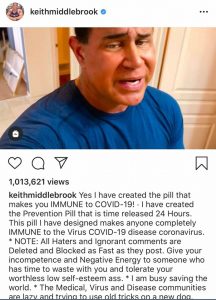 Middlebrook listed  having addresses in Westport, Newport Beach, and Murrieta. He is charged with attempted wire fraud, which is a felony that carries a maximum penalty of 20 years of prison time.

Middlebrook was reportedly promising large profits for investments in a company he called, Quantum Cure CV Inc (QP20). He also fabricated a story that Earvin “Magic Johnson” was one of the potential investors who was on the board of directors. According to the affidavit in the complaint, Johnson confirmed that he had no knowledge of the scheme.

“During these difficult days, scams like this are using blatant lies to prey upon our fears and weakness,” said U.S. Attorney Nick Hanna in a statement. “While this may be the first federal criminal case in the nation stemming from the pandemic, it certainly will not be the last. I again am urging everyone to be extremely wary of outlandish medical claims and false promises of immense profits. And to those who perpetrate these schemes, know that federal authorities are out in force to protect all Americans, and we will move aggressively against anyone seeking to cheat the public during this critical time.”

The affidavit indicates Middlebrook offering two potential investors the opportunity to make $300,000. An investment with the potential to yield $30 million came with a promise that was secured by a current $1 billion offer “by an unnamed buyer in Dubai,” the affidavit states.

The case is an still under investigation by the FBI and is being prosecuted by Assistant U.S. Attorneys Valerie Makarewicz and James Hughes, Major Frauds Section.

How Technologies are Transforming the Trucking Industry