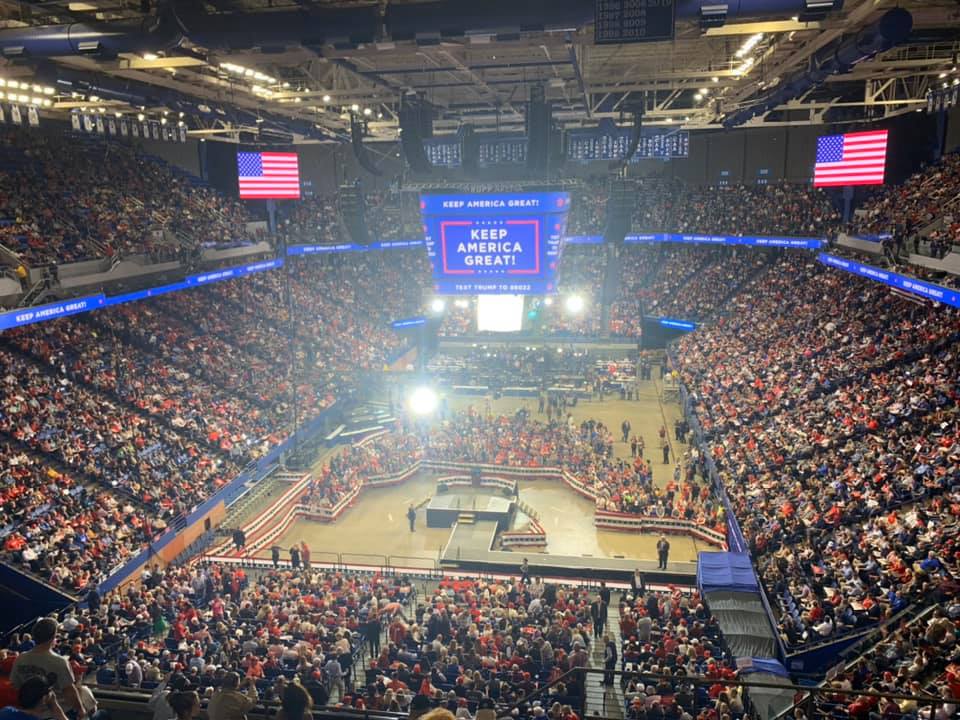 “Tomorrow, the people of Kentucky will head to the polls and you will vote to re-elect your terrific Republican Governor, Matt Bevin. He’s done a fantastic job,” said Trump.

“With the help of your Senate Majority Leader, Mitch McConnell, we have confirmed 157 judges to follow the constitution, as written.” President Trump went on to say, “and we’re supporting our police, we’re rebuilding our military, we’re defeating radical, Islamic terrorists like never before. The monstrous animal known as al-Baghdadi is dead, and the man that took his place is dead also.”

“No enemy on earth stands a chance against the awesome power of the American military. Which is now stronger than ever before We’ve rebuilt it, and it’s all made in America. Our country is winning again, and our country is highly respected again,” said President Trump. “Matt is a Veteran, a patriot, a business leader. Under his leadership, Kentucky has created almost 57,000 new jobs, but I helped also. He’s pro-gun, Pro-life, and pro-second amendment.”

“Under Republican leadership, the economy is booming, wages are rising, confidence is soaring, Kentucky is thriving like never ever before and America is stronger than ever before. It’s true,” said President Trump. He added that Kentucky’s unemployment rate is the lowest point in the country’s history.

“President Trump has great courage. He faces down fake media every day, but Congress needs to step up and have equal courage to defend the President. Hunter Biden made $50,000 a month. That’s the definition of corruption, and we know he only got it because of his family connections. We now also know the name of the whistleblower. The whistleblower needs to come before Congress as a material witness because he worked for Joe Biden at the same time Hunter Biden was getting money from the corrupt oligarch. I say tonight to the media, do your job, and print his name, and I say this to my fellow colleagues in Congress and every Republican in Washington, step up and subpoena Hunter Biden and subpoena the whistleblower.”