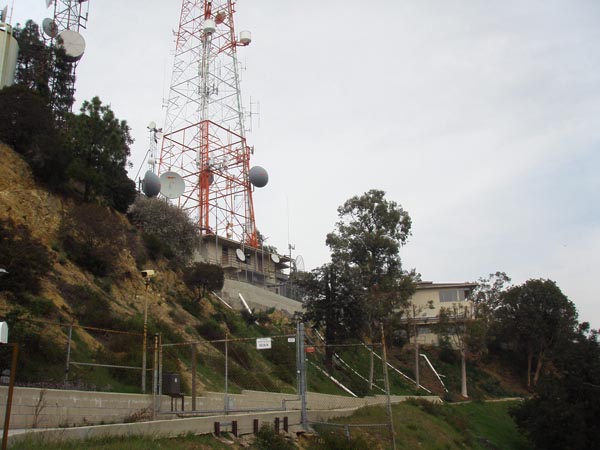 BEVERLY HILLS—Do you recognize the KJOI call letters?  Do you associate them with the antenna on theSanta Monica Mountains?  You know, it looms over Mulholland between Laurel Canyon and Coldwater. So what’s the name of that peak?  We have Cahuenga Peak, Mount Lee, all kinds of names for local geological spots, but no one had a name for this peak.  Seems everyone just called it KJOI Mountain. What a mondo stupid name I thought.  It’s our beacon home; have some respect.

Did you know there is a U.S. Board on Geographic Names?  I checked but no luck with finding a name. Our mountain wasn’t listed. I checked with the Los Angeles Bureau of Engineering.  Nothing.   So I thought maybe Mount Tongva, after the local aboriginal tribe, might be a dignified name. I contacted the tribe. Seems there is a Mount Tongva over in Pasadena. Next.

Now my curiosity was peaked. Maybe the antennas will tell me the story. I checked Google maps to see if I could locate an address. It looks like the lot is inside another lot, and has no street address.  At first I assumed it would be a Skyline or Green Valley address, so off I went without an address, but looking in the general vicinity.  Dead end.  I’m an intrepid explorer who’s often lost.  But my GPS urged me on. Seems that the antenna and house are located in Beverly Hills!  The front side is in Laurel Hills, and the backside is in Beverly Hills?  Now that was a surprise.  I made it up there and found a mailbox with an address on it: 2595 Braircrest Road, Beverly Hills.

The original radio station in 1948 was KMGM.  The Grand Opening was a star-studded affair filling six hours of original programming.  Lassie—yes the dog—was a guest.  It was significant that in a market already saturated with radio this station was the first “Frequency Modulation” station. Yup –  FM.  A whole new concept in broadcast radio.  By the early ’50s the station had gone off the air.  In 1952 it was purchased by Arthur and Jean Crawford, owners of Crawfords, a Hi-Fi store on 456 N. Rodeo Drive,Beverly Hills. It began broadcasting as KCBH ”“ K; Crawford; Bevelry Hills. At that time the antenna was part of the house, and located in “ Beverly Hills adjacent.”  The Crawfords finagled the location inside the boundaries of the prestigious Beverly Hills.  They added the second story to the house, and moved the antenna to a stand-alone location on the property where it remains to this day.

There is more ground-breaking history.  On March 10, 1957, KCBH broadcast the first ever simulcast radio program.  From 5-6 p.m. KCBH (98.7) and KHOF (99.5) both broadcast Tchaokowsky’s Quartet in D Major and Romeo and Juliet.  In order to have the best binaural experience, listeners were directed to “place the radio tuned to KCBH on their left, and the other tuned to KHOF placed seven to 10 feet to the right of the first set.”

The old KCBH has changed hands many times, and has had lots of call letters. But the name KJOI Mountain seems to want to hang around.  The most recent handover was to Regency Broadcasting of Cleveland, Ohio for a record setting $44 million.