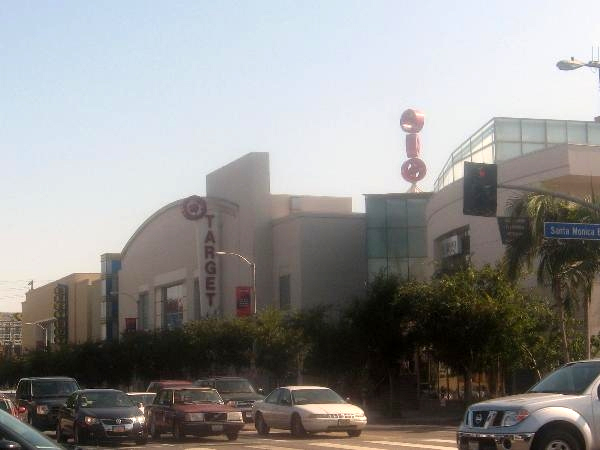 WEST HOLLYWOOD —A woman who apparently suffers from mental illness entered a local Target store at 7100 Santa Monica Blvd on La Brea Avenue on May 3, and allegedly proceeded to the kitchen section where she found two knives, and then attacked four store customers. Deputy Clay Grant Jr. was shopping for paper towels at the time, and managed to get the suspect to drop the knives. The off-duty officer subdued her until the authorities arrived.

Store security guards immediately helped as well. Witnesses report that a woman wielding a knife was making comments about the authorities, and sounded confused began stabbing customers who were trying to get away from her. Antioch resident, Layla Rosetta Trawick, was arrested on Monday on suspicion of attempted murder. The random act of violence has left one victim in critical condition.

Shoppers ran out of the store in fear that Trawick would stab them. Out of the four people wounded, one was a woman carrying a baby. The baby was not hurt during the incident. The most seriously injured victim was taken to Cedars-Sinai Medical Center in critical condition, officials said. He was showing signs of improvement late Tuesday, May 4.

Sgt. Conner with the West Hollywood division of the Los Angeles Police Department tells Canyon News, “She was arraigned on Wednesday morning and she is now being held at the CRDF facility until a trial date is set.” Family members of the suspect declined to be interviewed, but stated that they had tried many times to get Trawick some mental help.

A store manager, who asked not to be identified by name, tells Canyon News, “We care about our customers, the law enforcement authorities have been wonderful and easy to work with, and have been doing a thorough investigation since the incident. Target has placed additional security inside our store and business is back to normal. It’s still a great place to shop and we care about the safety of our customers. The store is safe and we look forward to you shopping here soon.”

L.A. County Sheriff’s Department spokesman Steve Whitmore confirmed that Trawick was previously being held at the West Hollywood Sheriff’s Station jail on $1 million bond. Then confirmed she’s now been moved to a larger facility. Store security cameras captured the attack, but the footage is not being released. It has been turned over to law enforcement for further investigation and use in prosecution.