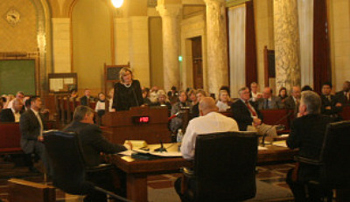 In a statement from his office, Krekorian complimented Parks on his time as Budget Committee chair.

“For eight years, Councilmember Bernard Parks has led this committee with dedication, skill and vision.  His fiscal discipline has helped keep the City afloat in incredibly stormy seas.  All Angelenos are in debt to Bernard Parks for his service as Budget Chair,” Krekorian said.

According to the City of Los Angeles’s website, the five-member Budget and Finance Committee is authorized to review the mayor’s proposed yearly budget in its entirety.  The committee’s other duties include reviewing expenditures of city funds, levying taxes and fees (except city business taxes) and reviewing the city’s debt financing procedures and activities.

Looking ahead to his new assignment as Budget Chair, Krekorian said he was well aware there would be “no simple fixes or easy solutions” to the city’s budget deficit, which is estimated at $150 to $200 million. Krekorian, who has been a councilmember since 2010, said that how the city council and the residents of Los Angeles respond to this time of “crisis” would define Los Angeles for years to come.

“The work we do now can and must create a firm foundation upon which to build a strong future for our city,” Krekorian said.

“I am very proud of the record of achievement that we established during my chairmanship of the Education and Neighborhoods Committee, and I am confident that the path forward for neighborhood councils is now bright.  While I will no longer chair that committee, I will continue my commitment to a stronger neighborhood empowerment movement in this city,” Krekorian said.