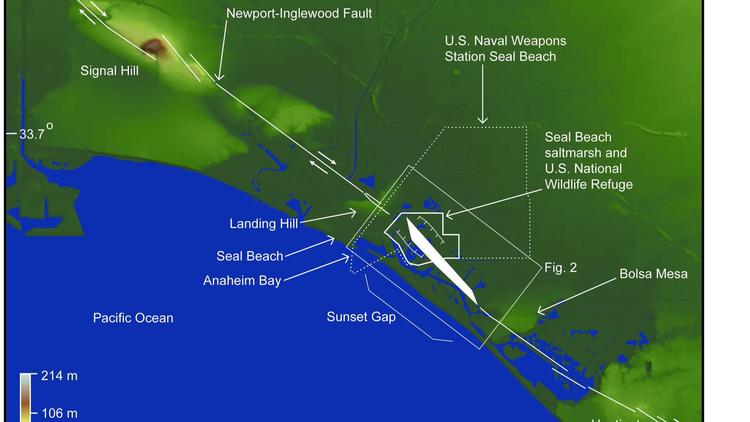 LOS ANGELES—New research shows that the Newport-Inglewood fault, one of Southern California’s top seismic danger zones, is more dangerous than experts expected. It is capable of producing disastrous temblors. The fault runs under some of the California’s most densely populated areas, from the Westside of Los Angeles to the Orange County coast.

The Los Angeles Times reported that the new study shows that major earthquakes that occurred centuries ago caused a section of Seal Beach, near the Orange County coast, to fall 1.5 to 3 feet in seconds. The drop has the capability to extend to the surrounding geologic areas: the U.S. Naval Weapons Station and the Huntington Harbour neighborhood of Huntington Beach.

“It’s not just a gradual sinking. This is boom — it would drop. It’s very rapid sinking,” stated Robert Leeper, the lead author of the report and a geology graduate student at the University of California, Riverside.

The LA Times reported that a previous study at Cal State Fullerton completed research for evidence of ancient tsunamis. The study found buried organic deposits that were determined to be the prehistoric remains of bog surfaces dropped by earthquakes, roughly dated in 50 B.C., A.D. 200 and the year 1450, that occurred along the Newport-Inglewood fault.

These earthquakes were suspected to have larger than a 6.4 magnitude Long Beach earthquake of 1933. The observations suggest that earthquakes with magnitudes ranging from 6.8 to 7.5 trembled along the Newport-Inglewood/Rose Canyon fault system. The fault system stretches from the border of Beverly Hills and Los Angeles through Long Beach and the Orange County coast to downtown San Diego.

Scientists have come to the conclusion that a theoretical 7.5 magnitude earthquake could occur if the Newport-Inglewood fault links up with the San Diego County coast’s Rose Canyon fault, based on the length.

Seismologist Lucy Jones, who was not affiliated with the study, stated: “If you’re on the Westside of L.A., it’s probably the fastest-moving big earthquake that you’re going to have locally. A 7 on the Newport-Inglewood is going to do a lot more damage than an 8 on the San Andreas, especially for Los Angeles.”