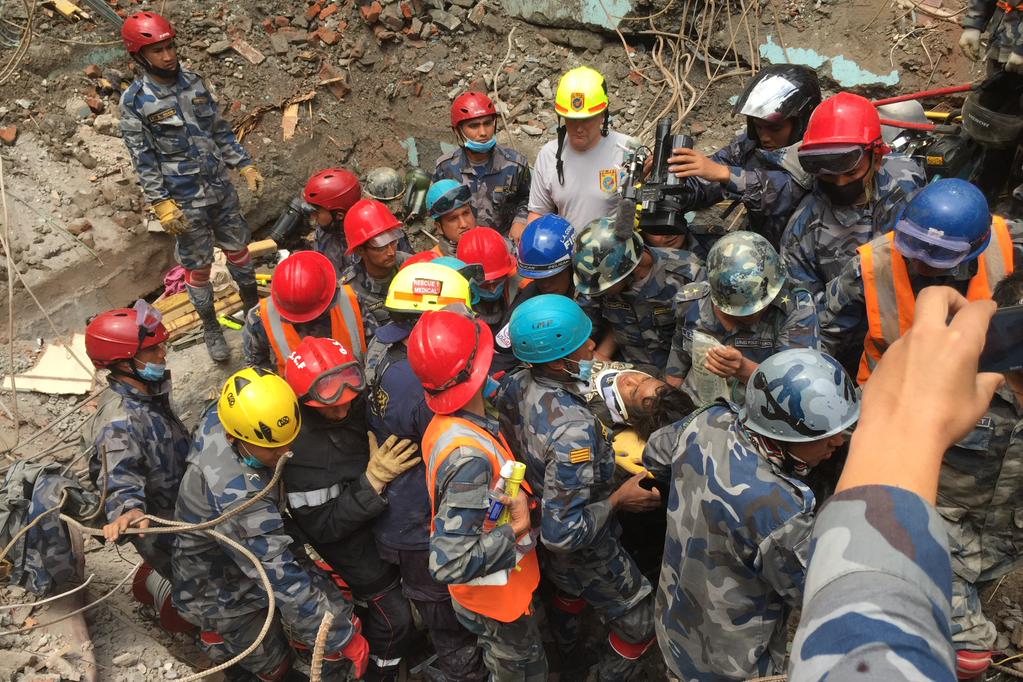 LOS ANGELES—On Tuesday, April 28, the U.S. Agency for International Development (USAID) sent its Disaster Assistance Response Team (DART) to Nepal to aid in saving lives from collapsed structures, among other recovery efforts, after a 7.8 magnitude earthquake struck the country on April 25.  The DART includes two Urban Search and Rescue Teams (USAR), one of which consists of Los Angeles County firefighters.

The 57-member USAR team has taken quick action to rescue the victims of the earthquake, as well as provide emergency materials to Nepal’s citizens.  Over 45 million tons of supplies have been distributed, including 700 rolls of plastic sheeting, used to make temporary shelters to protect people who have been displaced from their homes from the rain.  Twelve canines, six of which are from Los Angeles County, were also deployed to Nepal.  They play a vital role in rescue efforts because sound cannot travel from the inside of the rubble to the outside; someone who is trapped and calling for help might only be detected by a K-9.

USAID has recruited 14 disaster experts as part of DART, who have been working with the Nepalese military to map out the logistics of the situation.  In order to make informed decisions about where to search for survivors in the rubble, they are accompanied by structural engineers who have an eye for noticing gaps in damaged buildings where people might be stuck.  These strategic efforts are  paying off, because on April 30, a 15-year-old boy was rescued from the rubble using search cameras.

LA County Fire Captain Andrew Olvera, who is among the several dozen firefighters taking part in the rescue effort, said this about saving the boy: “The whole operation was dangerous, but it’s risk versus gain.  To save a human life, we’ll risk almost everything.”

The latest numbers from the UN say that the earthquake is responsible for the deaths of about 5,000 people; Over 10,000 people have sustained injuries, and the earthquake has impacted approximately 8 million people overall.  For updates on the USAR from LA County, follow @LACo_FD on Twitter.