UNITED STATES−On Sunday, February 7, the doors of the Bravery Brewing in Lancaster, California were temporarily closed by an LA County health inspector.

The health inspector, whose name has not been mentioned came in to Bravery Brewing at 11 a.m. and interrupted a sales transaction.  She relayed to the employee that she was shutting them down because they were required to have a food truck outside and that he may be losing his job.

The surveillance cameras were still on. Once the doors were closed, the health inspector was captured on video breaking into a dance.

An LA County health inspector dances moments after ordering @BraveryBrewing to close. She ended up being wrong. Ruined BB's Super Bowl business. If your restaurant has been bullied/intimidated by LA County Health, DM me. @KFIAM640 @johnandkenshow @GaryandShannon @CalRestaurants pic.twitter.com/QQXJ2POG70

According to Avery, once the health inspector realized she was in the wrong, she admitted that there was, “some kind of misunderstanding.” She noticed that the health inspection papers were wrong and that once they put the right ones up, they could reopen.

By this time, Avery missed hours of Super Bowl business, and he was within code. Avery indicated that like so many other small businesses, he had been, “financially and emotionally decimated.”

Bravery Brewing specializes in barrels of aged beer as well as specialty drinks and local favorites.

Avery indicated he did get a call from the local health department with an apology the next day.

On the same day, the county of Los Angeles Facebook page encouraged people to stay home and watch the game. One of the advertisements was available in four different languages. Los Angeles Mayor Eric Garcetti also advertised staying home on his FB page. 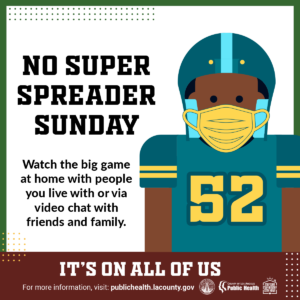 “The best offense is a good defense. Watch the big game from home today and don’t turn Super Bowl Sunday into a super spreader event. #NoSuperSpreaderSunday.”

President Biden, in his February 16 Town Hall, spoke of getting the vaccine out and vaccinating teachers. Biden, Newsom and Garcetti have not released statements about the reopening of small businesses.