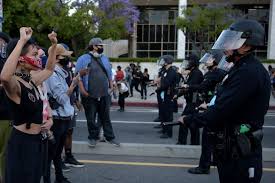 CALIFORNIA— Demonstrators began to gather in Downtown LA on Thursday, May 28 in support of the protests happening in Minneapolis over the death of George Floyd.

Floyd, a Minneapolis resident, died earlier this week in police custody on May 25. He was placed in handcuffs over allegedly writing a bad check at a grocery store. Floyd was seen in a leaked video being forced down by the knee of MPD officer Derek Chauvin for a total of almost 9 minutes. Floyd stated several times in the video, “I can’t breathe.”

The officers stated Floyd allegedly resisted their investigation of the situation, leading to holding him down. In retaliation of Floyd’s death, there have been massive protests breaking out across Minneapolis, one even resorting to the burning of the MPD precinct.

The Black Lives Matter group in LA took action on Thursday near the Hall of Justice. What started peacefully turned into several hundred protestors holding signs and blocking traffic on the 101 Freeway.

In videos of the demonstration, protestors are shown barricading a California Highway Patrol (CHP) car. Several people banged on the windows and a few jumped onto the vehicle. The Patrol officer sped up, resulting in one man falling off of the car.

Another CHP car was shown being hit and received a board being thrown into the back windshield. The Los Angeles Fire Department arrived at the scene and treated the individual that fell.

Protestors dispersed from the seen and fled to stand outside of the Metropolitan Detention Center, raising their fists in solitude, the power symbol for Black Lives Matter.

The Los Angeles Police Department released a statement by Chief Michael Moore on their Twitter on May 29:

“In response to recent demonstrations, we stand with our communities and rebuke any instance of police brutality,” they tweeted, “However, as we continue to facilitate spontaneous and planned protests, violence or property damage has no place here in LA.”

The statement further went on to say LAPD will enforce action on anyone who harms the general public or officers. 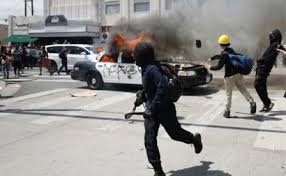