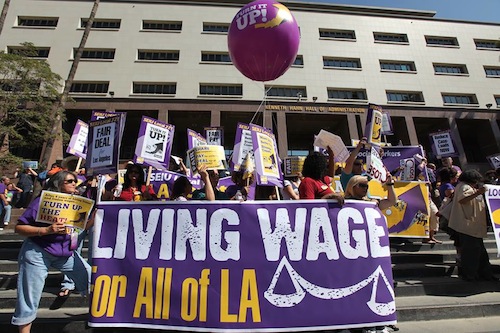 The tallied votes on November 9 sent a loud message— Los Angeles County workers of Services Employee International Union (SEIU) are not willing to cave on their “bargain for the common good” in contract negotiations with the county, with 95 percent of voters saying “yes” to a possible strike.

SEIU 721 is the largest labor union in Los Angeles County, representing over 55,000 employees in Southern California. SEIU 721 bargaining members and LA County officials stepped away from the negotiating table after failing to reach a compromise over labor contracts, which expired on October 1.

For two weeks, voting booths were held across the county for union members to cast their ballots on whether they wanted to give the bargaining team the authority to “escalate actions and possibly call for a strike in order to win a fair contract with LA County,” the SEIU 721 website states. The union said an unprecedented amount of tens of thousands of county workers turned out to vote.

Union leaders are ramping up efforts with scheduled civil disobedience trainings next week for county workers and community members. Lowell Goodman, spokesman of SEIU 721, told the Canyon News that Revered James Lawson, a protege of Dr. Martin Luther King, Jr., would be leading the trainings.

Goodman summarized five main points of what local 721 members are demanding, which include; a raise in the living wage for employees of private companies that contract with the county, strengthening of the ride-share program, closing of the tax loophole that allows corporations to avoid paying property taxes, lowering of the social worker-to-child ratio, a fair raise for county workers and affordable health care.

Some of the conflict revolves around the upcoming full-implementation of the Affordable Health Care Act. Los Angeles County workers argue they will not be able to afford the health care premium increases set to take affect in January 2014 based upon current living wages. SEIU 721 is asking the county to offset the health care costs and for reasonable raises for county workers who have not received a raise now in five years.

“The county said ‘no’ to all of them,” Goodman said, “and the sticking point is that they’re engaging in hostage-taking by holding retiree healthcare hostage. They want to slash health plans of retired workers and unless you agree to that, we’re not covering premiums of current employees so that the raise being offered actually ends up being a pay cut.”

SEIU 721 is also requesting the county support a motion for reforming a tax code loophole exploited by corporations to avoid paying property taxes. The state tax code does not require tax reassessments on property changes to real estate as long as no one owns more than 51 percent of the property.

“One way you can look at it is companies save millions of dollars in taxes,” said Goodman regarding the tax loophole, “the other way to look at it is that it starves the state of money.”

On November 1, SEIU 721 organized protest against Brookfield’s use of the tax loophole “that could cheat LA County out of $10 million a year,” their website states. By revising the tax code, the local union believes the county could gain a host of benefits from the additional funds.

“Money from real estate taxes could be used to increase the amount of social workers, which saves kids, reduce the class sizes of elementary schools, build new parks and maintain them and increase public transit,” Goodman said.

In a separate action, members of SEIU 721 filed a lawsuit against the Department of Children and Family Services (DCFS) on November 5 regarding unfair treatment of social workers. County social workers are charging DCFS with violating the social worker-to-child ratios outlined in their county contracts.

Canyon News spoke with the press deputy of Los Angeles County Supervisor of the Third District, Zev Yaroslavsky, who represents the western part of LA County. Regarding the union’s demand, Yaroslavsky’s spokesman said, “The County’s position is we can and we will negotiate at the table, but not through the media.”

The press deputy said the office is deferring comment over the matter to the appointed county negotiating team and County CEO, William T Fujioka.