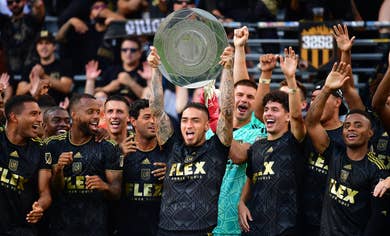 LOS ANGELES—Once Ilie Sanchez delivered the game-winning penalty kick in the net, as LAFC captured their first ever MLS Cup knocking off the Philadelphia Union in the Penalty Shootout 3-0. Over 32,000 fans blew the roof off Banc of California Stadium on Saturday, November 5.

It is the first MLS Cup for LAFC, which launched in 2018. After a 3-3 finish in extra time, it seemed inevitable and appropriate such a classic match should have a fitting end.

It is the greatest MLS Cup in history of Major League Soccer in the opinion of most experts. The LAFC players celebrated in one giant huddle at the corner of the stadium spilling into the crowd.

The dramatic fashion of the LAFC title is another testament that Los Angeles is the city of champions with recent wins by the Los Angeles Lakers and Los Angeles Rams. Star power came from Gareth Bale, who entered the game in extra time as LAFC was trailing 3-2.

With LAFC down to just 10 men, Bale headed the equalizer into the net with less than a minute remaining. Bale came off the bench injured and saved the day reminiscent of Dodger legend Kirk Gibson’s home run in game 1 of the 1988 World series.

Another Hollywood element typically reserved for a screenplay involved our backup goalkeeper, John McCarthy. Starting goalkeeper Maxime Crepeau was carted off the field after running into Union forward Cory Burke. Crepeau sacrificed his body and received a red card to help LAFC to hoist the title.

LAFC took a 2-1 edge in the 83rd minute, but the Philadelphia Union refused to give up. Defender Jack Elliott scored on a header forcing extra time, tied at 2-2.

Elliott scored again deep into stoppage time, and the championship was seconds from vanishing prior to Bale’s heroics. Philadelphia was clearly shaken up, failing to convert a single goal.

It was absolute bedlam, as fans waved flags in the stand as black and gold smoke permeated the sky. Congratulations LAFC!