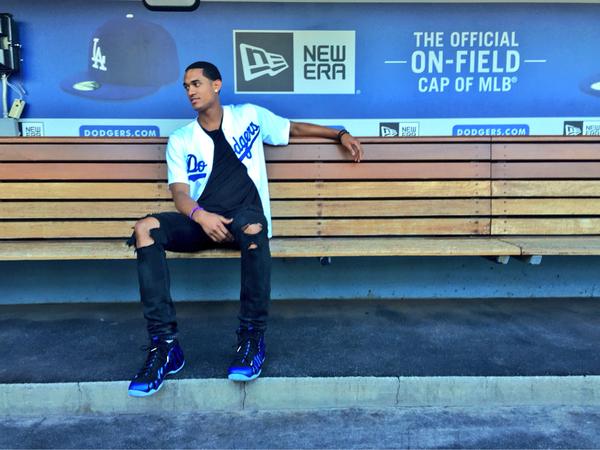 Lakers second-year guard Jordan Clarkson stepped up to the mound and threw a “slam dunk” straight into the glove of LA Dodgers catcher A.J. Ellis on Tuesday, August 11, a much improved performance from Nick Young’s interesting throw a year ago.

The 1988 NBA Championship Trophy was on display for fans along with the 1988 MLB Commissioners Trophy to take pictures with for most of the night. The 1988 season was the only time the Lakers and Dodgers both won championships in the same year.

The Lakers Girls were also present in sparkling gold uniforms for pictures with the trophies.

Pregame activities also included DJ Adam in the right field plaza and Dennis Powell, who pitched for the Dodgers in 1985 and 1986, signed autographs in the left field plaza. Singer, songwriter and trumpeter Spencer Ludwig from the indie pop band Capital Cities performed the national anthem.

Clarkson joined the Lakers Girls in officially starting the game with the pitch and then declaring the infamous line, “It’s time for Dodger baseball.”

When asked about the upcoming season, Clarkson shared his thoughts with NBC Los Angeles 4 before his pitch: “We got a lot of young guys, including myself. We just got to put it together and work hard. It’s not going to happen right out of the jump. It’s going to be a day-by-day process for us.”

Clarkson, a second-round pick—46th overall—for the Lakers in last year’s NBA Draft began his career logging most of his minutes in a Development League uniform for the Los Angeles D-Fenders.

He didn’t play for the Lakers for much of the first half of the season, but due to multiple injuries to the Lakers backcourt, he ended up starting 38 games, primarily at point guard, and averaged 15.8 points, five assists and 4.2 rebounds as a starter.

On March 24, 2015, he had a season-best game with 30 points and 7 assists in a 102–117 loss to the Oklahoma City Thunder. Starting alongside Jeremy Lin, the pair became the first Asian-American starting backcourt in league history.

For the season, he was named to the NBA All-Rookie First Team. In the prior 30 years, there had been only four other second-round picks that were named to the first team.

The question for this year’s team will be if some of the Lakers youth can have the same type of success as Clarkson–who attended his first-ever MLB game on Tuesday night–did in his first year with the franchise. If so, it could be a great combination with a healthy Kobe Bryant.

Lakers Night turned out to be a success, as the Dodgers beat the Washington Nationals, 5-0.