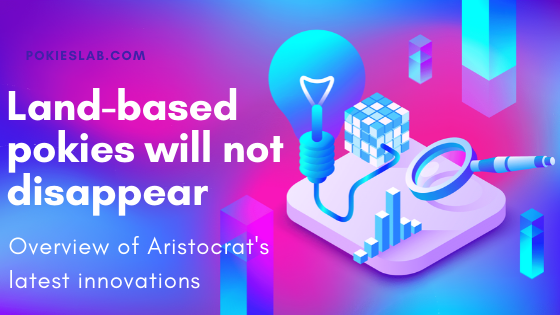 UNITED STATES—There’s a popular sentiment in the public about land-based casinos disappear within the next few decades due to the success of online gambling websites. Since younger generations prefer to play online, more physical casinos are expected to shut their doors as demographics shift. However, large slot machine manufacturers disagree with this idea.

Aristocrat Leisure, the $20 billion industry giant, recently introduced a new line of innovative slot games to recapture the interest of pokie players. They’re doing better than ever financially, with investments in both digital and land-based gambling markets. Aristocrat innovations deserve a closer look for anyone interested in where the industry is headed.

Aristocrat Leisure has been operating from Australia since 1953 and has since become a multinational corporation with assets in casino games, software technology, digital and mobile games, as well as electronic table games. They’re present in over 80 countries and are known for setting trends for land-based and online pokie machines since the early 2000s. Their free online Aristocrat pokies list consists of hundreds of pokies available in Australia and elsewhere for Android, iPhone, PC, and other devices. Popular titles like 5 Dragons and Indian Dreaming are played for real money at online casinos and known for free spins as well as no deposit win bonuses.

As a publicly-traded company, Aristocrat regularly releases investor presentations. The most recent one shows a grand yearly revenue increase up 23% to $4.4 billion, as well as a 16% increase in operating cash flow and share dividends for investors up 20%. The lead-up to the new decade is intense, as they announce new releases for European and American markets.

“It creates wonderment, and it gives us interactivity between all the games, and it’s something special. So you know, we’re trying to make something special that you can’t play on your cell phone.”

The idea of delivering “wonderment and interactivity” applies to all their physical designs of late. For example, they implemented a new Wide Area Progressive jackpot system in the US, which is synchronized between many physical machines. Casinos can offer significant jackpots across multiple properties, engaging casino goers in new ways, and providing personalized promotions specific to a location.

Aristocrat Leisure won multiple awards for land-based solutions, including Land Supplier of the Year at G2E Las Vegas 2019 and Slot of the Year award for Buffalo Diamond. Despite the popular sentiment about land casino decline, Aristocrat solutions are doing surprisingly well on the market, with new tech line-ups coming: Edge X and MarsX cabinets, Arc Canopy, and Bar Top Poker. 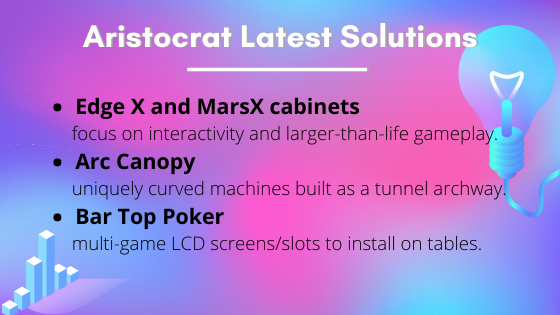 These projects deserve a closer look, as they’re set to define casino going experience throughout the first half of the 2020s.

Both the Edge X and MarsX saw simultaneous release in Europe. As Chief Product Marketing office Ian Adams put it:

“Both form factors and the respective games selected for their launch have shown tremendous performance across North American gaming floors in recent months and we are confident we will receive similar feedback from customers on this side of the Atlantic.”

These machines are unique in their enhanced graphics, which allow for an improved audio-visual experience across multiple screens at the same time. They utilize Aristocrat Gen9 hardware, compatible with games designed for previous cabinets, but with improved speed and graphical fidelity.

EdgeX comes with a curved 43″ 4K display and a 27″ HD topper. The design is customizable and allows for soft-touch interactive sound benches for two players. Its launch coincides with the release of three slot games: Farmville, Madonna, and Mad Max: Fury Road. Jackpots will range between 250,000 and 500,000 credits, with the progressive grand jackpot starting at 1,500,000 credits. All three slot games offer different bonus rounds such as Cash Hold in Farmville, Karaoke Feature in Madonna, and Fury Road feature games in Mad Max.

MarsX cabinets can be installed back-to-back on casino floors due to unique design curvature. They have two 27″ 4K displays and a 27″ topper. Wireless chargers are embedded into the deck for player comfort, complete with a 4.1 immersive sound system. MarsX slots arrive with the top 5 most played Aristocrat slots, with new games to be announced during the early 2020s.

Arc Canopy is an unusually shaped machine that recently passed the prototype stage. It creates a tunnel archway on the casino floor, immersing the player within. The appeal of Arc lies in limited availability – there are hundreds of regular slots on the casino floors. Still, such machines can only be positioned in a few places, creating a small “bubble” inside.

It was first introduced at G2E 2019, but not yet set into commercial manufacturing. The immersive archway design and surround sound are designed to deliver a unique experience for up to 4 players. Details about the exact hardware specifications and games available on Arc Canopy are going to be released sometime in 2020.

Winner’s World Multi-Game bar top cabinet is set for installation in hundreds of locations worldwide. It’s a reinvention of traditional bar-installed machines, coming with a 23.5″ LCD screen and easy-access USB chargers for an improved bar experience for both players and staff. The monitor is set with a «smart drink» tracking light, which makes service and rewards easier to set up.

As Hector Fernandez of Aristocrat Americas put it:

“While innovation abounds in every area of the casino, bar top play has been largely stagnant […] we’re excited to bring player-favourite Aristocrat games to these venues for the first time.” Source: Casino Review

The Bar Top screens contain popular Aristocrat pokies such as Buffalo, Buffalo Gold, Wild Lepre’ coins, and others. The main attraction is standard electronic poker, available at a single tap while not distracting from Vegas bar experience.

Aristocrat Leisure is focused on creating tailored experiences, offering games for diverse tastes. Their success in land-based casinos proves that an innovative approach still earns billions in revenue, despite popular sentiment about industry decline. Players come to Vegas casinos for an experience, which is why engaging slots and unique design proves to be more effective than the mere promise of large jackpots.

Aristocrat pokies still offer progressive jackpots to players, synchronized between hundreds of physical machines through the Multi-Link system. Australian pokies are popular with their unique formulas and traditionally high volatility, with the unique cabinet designs adding to the suspense built up between spins.

While banking on digital markets with mobile games and social casinos, Aristocrat still makes around 70% of its profits in land-based locations. It is unlikely to change in the 2020s, as the company continues to introduce new technologies exclusive to casino floors.