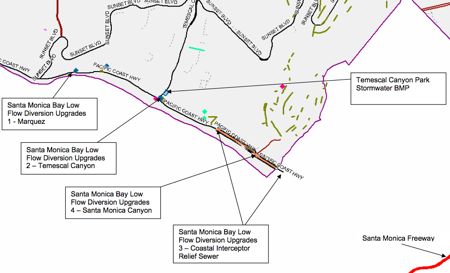 PACIFIC PALISADES—This fall, there may be major delays on the Pacific Coast Highway in Pacific Palisades as the city pursues construction projects in conjunction with Proposition O, the Clean Water Bond passed by voters in 2004.

In the September Newsletter of the Pacific Palisades Community Council, board members announced to community members that they should “Expect more delays as this work will close traffic on one PCH southbound lane from Temescal to the Santa Monica City border.” In connection with the ongoing two-year Coastal Interceptor Relief Sewer Construction project, traffic on one PCH southbound lane will be closed during the day from 5 a.m. to 9 p.m. and two southbound lanes will be closed at night from 9 p.m. to 5 a.m.  All three northbound lanes will remain open.

In November of 2004, Los Angeles voters passed Proposition O, authorizing $500 million for the city to pursue projects relating to public health.  The legislation is an effort by voters to help the city adhere to the requirements of the Federal Clean Water Act: to protect the quality of food and water, to create open space and to provide protection for the habitat.  The Coastal Interceptor Relief Sewer project is upgrade 3 of the Low Flow Diversion program and will upgrade the Sewer situation on PCH.

The plan requires the construction of 1,400 feet of sewer in the parking lot of the Will Rogers State Beach and 3,100 feet on the highway south of the beach lot; the lines will range from 36 inches to 48 inches. According to the project overview, “The city is participating with Caltrans, City of Santa Monica, City of Malibu and numerous city departments to maximize the coordination and communication between agencies with the goal of mitigating the adverse traffic impacts to the public on PCH.”

At the Community Council meeting on August 12, board member George Wolfberg made a motion, which was passed unanimously, to encourage the City of Los Angeles to take measures to reduce traffic with the upcoming road closures on PCH.  He suggested “the posting of appropriate electronic message boards to deter ‘Z’-traffic” as well as encouraging community members to participate in carpools and change driving times for non-essential trips.

The Coastal Interceptor Relief Sewer project is slated to continue through 2011.  Though community members should ready themselves for lane closures on PCH this fall, the project does not require the highway closures throughout the project’s completion as much of the construction will take place in the parking lot of the Will Rogers State beach.  For more information on the sewer project, call 877-700-3069begin_of_the_skype_highlighting              877-700-3069      end_of_the_skype_highlighting or visit lapropo.org