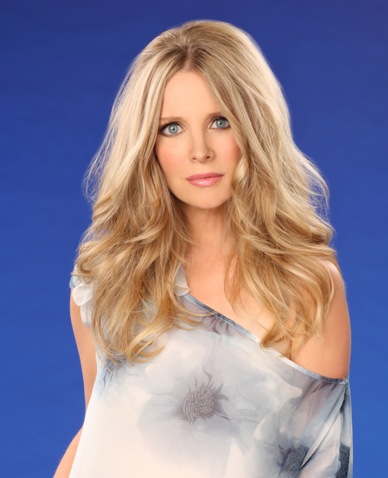 MALIBU—Lauralee Bell took time out of her hectic schedule this week to discuss her return to “Y&R,” which has been discussed a lot over the recent couple weeks. Bell’s character Christine showed up in Genoa City and viewers expected her to be involved in the Chance witness protection storyline and it quickly segued into Christine arresting Sharon Newman for the murder of Skye Newman. “That was a surprise for me, Tommy. When Maria [Bell] asked me if I could do a few episodes, I expected possibly a week or two of episodes, but it’s been going along now for several weeks. And it’s not bad at all. The storylines are all exciting and I’m finding it exhilarating with the great writing, that is reminiscent of my dad’s great storytelling. Maria truly understands ”˜Y&R’ now and she’s doing a tremendous job as head writer and executive producer,” said Lauralee.

When “Y&R” fans witnessed Christine’s arrest of Sharon, it was shocking. Viewers knew that Ronan’s physical illness was becoming increasingly serious and that he is in desperate need of a liver donor. After his mother Nina was tested and proved not to be a match, Ronan’s depression worsened. However, once Chris showed up, things got increasingly more complicated for the cop. Christine was furious that Ronan had slept with Chance’s ex-girlfriend Heather, and that somehow Heather had figured out Chance was not dead, but in the witness protection program. Her firing of Ronan was swift and immediate. “It was a tough thing for Nina to go through, it’s her son I fired and essentially took away his one lifeline, but Chris has Chance’s safety as her paramount responsibility, and if he is exposed as being alive too early in the case investigation, all of her and the U.S. Justice Department’s work could blow up in everyone’s faces,” said Bell.

“At least this time Chris didn’t interfere with Paul and Nina’s relationship. It’s enough that she’s being blamed for ruining both of Nina’s sons’ lives,” said the actress. “It has been exciting but very funny to be in the FBI mode one moment, then to be bossing around the Genoa City police in another, not to mention wearing a walkie-talkie on my hip. The other day a costar walked up and said, ”˜What is that on your side?’ I told him, it was a walkie-talkie. He got a big laugh out of it. This time around I’m doing it all it seems and the storyline is really working.”

Bell doesn’t seem to worry that her two days of work has turned into a month. “As long as I still have time for my other projects, you know I’m here, Tommy. This is home. I really love being here where my dad spent most of his career and life. I recently read the last two chapters of a book being written about him, which I know you will love, and it has brought back so many great memories. I remember how sick I’d be on Fridays saying, what’s going to happen Monday, dad? He’d just tell me to stay tuned, just like everyone else,” said Lauralee. William J. Bell’s imprint on this industry and on every one of us in the industry is unforgettable. It was Bill Bell who told me more than a quarter century ago, “That it’s best that people either love or hate your writing, and not be apathetic about it.” He taught all of us so many great lessons, and left such a talented group of young people in his beautiful daughter Lauralee, and handsome sons Bradley and Billy for the daytime entertainment world to flourish in after he has gone. His beautiful wife Lee is also a shining beacon of light and talent in daytime.

Pressed on when she’s going to leave again, Bell joked, “Tommy, as dad would tell you, stay tuned. As long as I have time and the storyline is exciting like it is right now, I’m here. When it’s time to go do things with ”˜Family Dinner’ Maria knows that is my priority, but until then, I’m enjoying working with such great professionals again.”

Fans are anxious to see if there is any back story between Christine and Ronan. Bell concluded, “We had a very interesting scene that will air soon. You’ll have to watch for it. But I can say that we played it leaving it very much a friendly discussion. Christine’s normal business conversation with Ronan wasn’t being played out in this scene. There is some mystique to what Chris has been doing in Washington D.C. while the show’s viewers have not seen her. Time will tell.”

Photograph of Lauralee Bell by CharlesBush.com