UNITED STATES—Lawmakers have cost taxpayers $21 million in lawsuits filed against the Trump administration since 2017, when 63 million people elected Donald J. Trump to become the 45th President of the United States.

Politifact cited as of late September 2019, Attorney General Xavier Becerra filed or joined 60 lawsuits against the Trump administration with his office “also filing a friend of the court briefs in additional cases against the administration.”

A lawsuit was filed on Friday, November 22, where Becerra’s website touts he is “leading a coalition opposing an EPA proposal to gut standards for harmful super pollutant methane and ozone-causing emissions.”

Governor Newsom joined Becerra in his efforts and signed a bill that would require any candidate on a Presidential ballot in California to submit five years of tax returns. The law was revoked in a recent countersuit by the Trump administration.

Some of the issues AG Becerra and Governor Newsom sued the administration include the following: 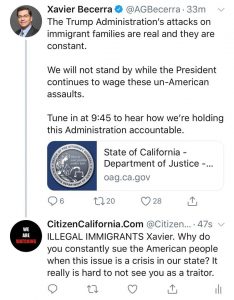 Canyon News reached out to the offices of Xavier Becerra and Governor Newsom, including Representatives Kevin McCarthy and Richard Nunes about the cost California has incurred in lawsuits against the POTUS, but have not received a response.