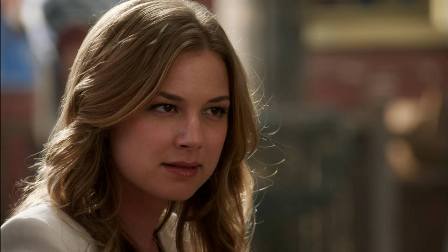 HOLLYWOOD—With Emily Thorne (Emily VanCamp) regaining her memory about who shot her on her wedding night, what does this mean for the Grayson clan? Well, all was not as it seemed in episode 12, “Endurance” which saw Emily become the hostage in Victoria Grayson’s (Madeleine Stowe) latest scheme.  The Queen Bee is very well onto the fact that Emily and Nolan (Gabriel Mann) are working together and could be up to some shady dealings.

Nolan was completely thrilled to see Emily regain her memory, but our heroine has dealt with a transformation that has changed her path to revenge. Aiden (Barry Sloane) begged Neko to help him protect Emily in her time of need, all the time Daniel (Joshua Bowman) continued to swoon after Sarah who was no longer interested in him. This led to a battle royal as Jack (Nick Wechsler) delivered a punch to the guy who nearly tried to kill his true love. Must say Jack felt quite satisfied with the punch he delivered.

Neko assisted Victoria with her latest plan to get the goods on Emily by moving her into Grayson Manor. Emily fooled Victoria by continuing to conspire as if she couldn’t remember what happened to her. It frightened mother dearest when Emily called out Daniel’s name, but it was to address the black eye he was sporting. Emily was pleased to meet Neko, who happens to be Takada’s daughter. It appears both ladies have more in common than the audience would suspect.

Marguax (Karine Vanasse) was a bit worried to see Daniel at the office, instead of being with his wife in her time of need. He fueled a bit of rage in the wrong direction in an attempt to get his boss to focus the story on Lydiaor the real culprit in the matter. Conrad did his best to scoop out information from Emily about that fateful night; it was almost as if the patriarch was hoping to use Emily as leverage. Victoria told Patrick that it was Daniel, who shot Emily, and both unleashed a bit of rage; the bond between mother and son is on thin ice.

Emily’s spirits were raised high by a visit from Jack, Charlotte (Christa B. Allen) and little Carl. Nice trick from Jack to leave a puppy for Emily to stay in contact with the people that can be trusted.  Neko discovered by eavesdropping that Victoria and Patrick were attempting to get hold of the infinity box from Nolan’s abode. It was a treat to see Neko deliver a blow to Emily’s gut to give her a reality check: don’t allow the Grayson clan to continue to get away with murder.

Victoria delivered a fatal blow to Emily by informing her that because of her injuries that she will never be able to bear children again; that may have been the deciding factor that forced Emily to rethink her quest for vengeance.

Patrick betrayed his love in an attempt to please his mother and gain access to Emily’s secret box. The big surprise was what she discovered upon opening the box. What was more intriguing was Patrick’s hint at Victoriaproviding him the information about his past that he desperately wants. Just exactly what secret is our matriarch keeping now? It was a dumbfounded moment, when Jack decided to announce to Margaux that it was Daniel who shot Emily and he had proof. Just what angle is Jack hoping to play with this revelation?

Emily played along with the Grayson clan with a press conference indicating that it was Lydia who shot her, we all know that is not true, but I have a feeling this is apart of Emily’s plan to keep her enemies at arms length. She could actually use Lydia to bring down the Grayson clan. Thankfully, Nolan switched the infinity box to fool Victoria, and planned a surprise for Patrick that is sure to bring him to his knees. Our heroine was fueled with rage, as she decided to break Aiden’s heart once again. Conrad used his pocket book to get an advance copy of the magazine, with plans to do something sinister in my opinion, Daniel and Victoria should be worried in my opinion.

Aiden was feeling quite a bit of pressure, as it appeared Neko was getting close discovering that her lover was responsible for her father’s death. Emily confessed to Daniel and Victoria that she was well aware that Daniel shot her.  It stunned both of them to a degree, and Daniel was none too pleased to discover that their nemesis had the upper hand.  She planned to milk the Grayson clan for as much as possible. Indeed a checkmate moment that was not expected.