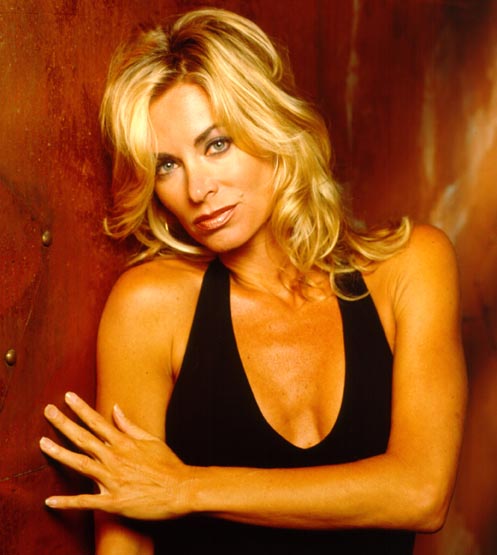 HOLLYWOOD—It is perhaps a surprise to the rest of society that most American icons in Hollywood are hottest over 40. A recent magazine feature stated that the hottest women in Hollywood are now all over 40 and are still cover worthy. TV legends Bradley P. Bell and Maria Arena Bell, who helm the two most popular soaps in the world knew this long before New York’s Madison Avenue crowd ever did. This week we chose Eileen Davidson, who portrays Ashley Abbott on “The Young and the Restless,” and Lesley-Anne Down, who portrays Jackie Marone Knight on “The Bold and the Beautiful,” as the two ladies whose performances on air last week offered such a gold standard to viewers of both hit shows they appear on.

Eileen Davidson as Ashley decided to break up with her lover Tucker McCall last week, only to participate in one of the most well-written and acted make up love scenes I’ve ever seen on TV. Ms. Davidson is one of the most solid and incredibly professional actors on the planet and beloved by her costars, producers and the crew. Seeing Eileen capture the emotions of insecurity, sadness, then ultimately passion and reunited happiness, all in one episode made her stand out in my mind this week. I’m sure I am far from alone when it comes to viewers of “Y&R” who feel the show really is hot when Ashley’s having a lot of emotional turmoil. The beautiful actress conveys femininity, beauty and strength in one of the most exciting roles any actress has ever had the opportunity to play.

Then there is Lesley-Anne Down, who stars on the most watched daytime soap on the planet. The British diva is one of the most strikingly beautiful women in the world. People Magazine agrees with me, as she has made their list of the Most Beautiful in the past. She makes my short list of one of the most exciting thespians in Hollywood to watch and to be enticed by. Lesley makes every male viewer want to be in a room with Jackie. Ms. Down’s very enigmatic spirit and essence pours out of her performances on a daily basis. Seeing Jackie in love with her husband Owen, giving her handsome son Nick advice and even standing up to Queen Stephanie when it is called for, makes Lesley one of television’s most dynamic divas of all time.

These two brilliant and gorgeous ladies are lucky to be working with our very own Brad and Maria Bell, who are history makers and Hollywood royalty.

Photographs are Courtesy: Lesley-Anne Down by Monty Brinton and Eileen Davidson by Gilles Toucas, both for Bell Phillip Television Productions andCBS