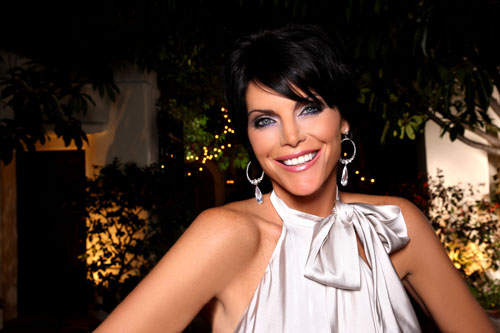 HOLLYWOOD —This week’s leading ladies gold standard goes to two actresses who had to play roles of threatened women. “The Bold and the Beautiful” actress Susan Flannery as Stephanie Forrester faced off with Brooke and Stephen Logan, who threatened to destroy her. Lesli Kay as Molly on “As The World Turns” toyed with danger knowing that Senator Silas Whitman is a dangerous man, but since Molly’s feeling left out of Holden’s life right now, the dangerous side of her has appeared. Both actresses are superbly talented, beautiful and most importantly, know how to push the emotional buttons of viewers to make us keep coming back for more of their incredible performances.

Lesli Kay as Molly recently was mortified that Senator Whitman managed to buy his way out of jail after being caught on tape plotting murder. Since Whitman’s return to Oakdale, he’s been relentless about his pursuit of Molly. He hates to lose the one woman who stood up to him. Molly on the other hand is deeply in love with Holden Snyder, but he’s so preoccupied dealing with his spoiled teenage daughter, he’s left Molly often to fend for herself, and her confrontations with the devious senator keep getting even more creepy and cagey. Kay plays Molly brilliantly. The sexy TV reporter just can’t seem to keep herself out of trouble. Without Holden’s guiding hand of sense, viewers know Molly’s on her way to a complete disaster. No one can play a train wreck-load of emotions like Kay.

Susan Flannery’s role of Stephanie Forrester is never boring. The writing of “B&B” is so incredible; there is never a boring moment. Miss Flannery’s work as an actress is well known, but this week seeing a frustrated Stephanie feel as if she’s being blamed wrongly for things was fun to see. Firstly, Stephanie had to defend herself from accusations that she either murdered or intentionally caused the death of Beth Logan. Facing that hasn’t been so bad, since she’s managed to get her ex-husband Eric on her side. Stephanie is a woman who could convince the Pope of anything.

Then Stephanie was told by Brooke early in the week not to go after her daughter Hope. Stephanie is fed up with having Brooke at Forrester Creations, so she condones her granddaughter’s attacks on any Logan she deems a threat. Sister Pam is also on Stephanie’s side; she’s constantly rigging lights and pulling electrical cords out of sockets, and having Donna Logan carted off with the insects last week was also appreciated by Stephanie. However, when Stephen Logan came at Stephanie and threatened to destroy her for all the decades of trying to harm his family, the look in Stephanie’s eyes made viewers realize this was not an empty threat.

Susan Flannery is spectacular on a daily basis, and so is Lesli Kay. It’s too bad Stephanie’s daughter Felicia, also played by actress Lesli Kay, is not in Los Angeles right now. Stephanie could use the hand of the one woman who may even be her mother’s match.