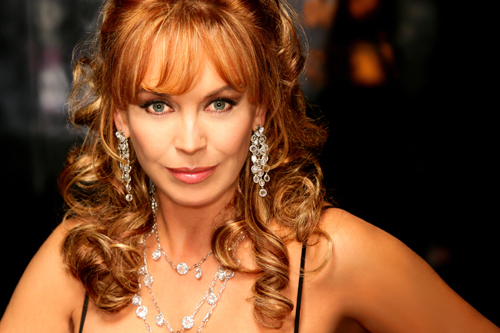 HOLLYWOOD —This week’s Leading Ladies Gold Standard goes to three ladies who were on the emotional edge of disaster. Eileen Davidson who portrays Ashley Abbott on CBS’s “The Young and the Restless” teetered on the edge of insanity, when memories she’d suppressed since last summer began to creep into her consciousness. The other two actresses, both stars of CBS’s “The Bold and the Beautiful” include Ashley Jones as Bridget Forrester Marone and Lesley-Anne Down who is Jackie Marone Knight. Bridget and Jackie’s lives are obviously intertwined as mother-in-law and daughter-in-law, but this week Bridget slept with her mother-in-law’s sexy husband and trouble between the two of them is about to come flooding out of the deception.

Ashley Jones as Bridget lost a baby with her husband Nick a couple years ago. After the miscarriage, Bridget was unable to give birth for fear of putting her own life in danger. The solution to that dilemma was to ask Sandy to become their surrogate mother. However, husband Nick playing the white knight so many times, played it once too many times and Sandy fell in love with him. While confiding in Nick that Sandy was indeed not her real name, that it was Agnes, the surrogate mom also confided that she had been brutally raped a few years ago. Nick went on a mission to find her attacker and he did just that making it certain that Sandy would fall even more deeply in love with him. Bridget found out after the fact, and the past several weeks have been intense between Bridget and Agnes. Bridget felt lied to by Agnes and betrayed yet again by husband Nick.

Just as fans and viewers of “B&B” thought that things would smooth over between the two ladies, Agnes collapsed and fell down a flight of stairs at Bridget’s mansion, only to lose the baby, a second loss for Bridget and Nick. This led Bridget to end up in the arms and bed of her mother-in-law’s husband, Owen. Jackie played by the beautiful international movie and television star Lesley-Anne Down is very much a staunch believer in her daughter-in-law, but when she finds out that Bridget like her mother Brooke always turns to the wrong man in a crisis it will be lethal. Jackie loves her husband Owen, but like any cougar, she’s always concerned and aware that she is much older than her hubby and that he may stray with a younger woman. That being said, Owen and Jackie have been as solid as any couple could be and Jackie’s assertions to her son Nick this week that his beautiful wife is loving and that they will survive the loss of their second child was ripe with the intriguing plot twists Bradley P. Bell makes work better than any other writer or producer of any show. Viewers of “B&B” are expecting a tongue lashing by the British beauty when she finds out her husband has been unfaithful with her daughter-in-law.

Maria Arena Bell has been setting this upcoming plot in motion for months. Like her late father-in-law Bill Bell, Sr. she has crafted “Y&R” into a series that viewers must have patience in order to see the emotional payoff of any big storyline. Adam caused Ashley to lose her baby last year, then convinced her with the help of a demented and evil physician that she was still pregnant. Soon after, Sharon was put in a mental hospital for her kleptomania, Ashley was later placed in the same psychiatric hospital. Ashley had been hallucinating that she was seeing dead women, Nikki and Sabrina Newman. On the very night Ashley was placed in the mental facility, Sharon went into labor. Ashley, who was having a hysterical pregnancy began to believe she was in labor as well. Sharon’s baby was stolen and handed to Ashley as her own by devious Adam. This week the beautiful Ashley Abbott finally began to put things together after a series of nightmares. Wednesday’s episode of “Y&R” was incredibly brilliant and well done. Leaving fans to wonder, what is Ashley’s next move?

Davidson, Jones and Down are incredible beauties as these photos show. However, everyone who watches “Y&R” and “B&B” know that they are much more than simple beauties, they are powerful performers who daytime TV could not exist without having.