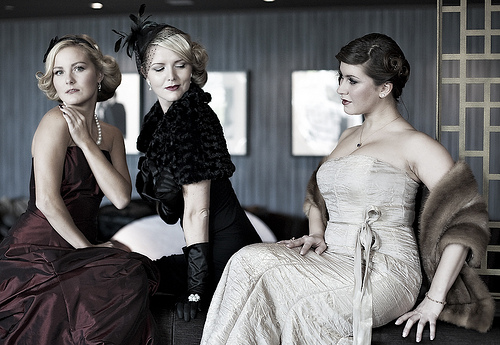 HOLLYWOOD —This week’s Gold Standard goes to three beautiful but extremely talented leading ladies. Ashley Jones who is one of the most solid and dependable actresses in television plays Bridget Forrester Marone, Susan Flannery who has earned every one of her multiple Emmys and deserves yet another one for 2009’s work under her belt and Katherine Kelly Lang who proves beauty is not only an asset but so is her immense talent as a leading lady in daytime television. What is the one thing these three thespians have in common? They all reign supreme on CBS’s “The Bold and the Beautiful.”

Bridget’s heart is surely about to be broken, but this time not by her nymphomaniac mother Brooke Logan, but her husband Nick. Bridget needs truth and honesty in her marriage, just as her comforter and loyal-relative Stephanie does in hers. These two ladies seemed almost angelic in their demeanor this week as they reminisced about the past and Bridget’s hope for a brighter future. Stephanie assured Bridget that her marriage was solid this time and Bridget spoke eloquently about how her happiness has often been dashed by betrayal. “I need honesty, Stephanie. That’s why I came to you.” Those words surely are an opening for disaster for Bridget. Nick at this moment is not being open and honest and that’s the one insecurity Bridget fears of her husband and almost everyone in her life, except stepmother Stephanie. What may seem like someone else’s week or storyline can soon turn into Ashley Jones’s amazing moment on the soap she loves and calls home. Bridget, this week, had a very heart-warming chat with stepmother Stephanie. Bridget reminded Stephanie that they had always been close and even through the hell they have both been experienced at the hands of Bridget’s mother Brooke that she [Bridget] and Stephanie remain extremely close. The scenes these two ladies shared was written with such complexity and creative prowess. Bradley Bell knew all of the dysfunctional history between Bridget and Stephanie and the tie that binds them together. Of course he knew, he was the genius who created and wrote it.

These two ladies were suppose to be supporting players this week. They played it that way, but frankly I couldn’t take my eyes off the duo. The nuances that Ashley Jones has learned over the years as an actress are as mesmerizing as her beauty, while Susan Flannery is only one thing ever. The very best there is in television.

Katherine Kelly Lang’s Brooke was multi-dimensional this week. Brooke confronted her ex-husband Whip Jones about his relationship with his cousin Sandy, who is carrying Brooke’s grandchild. Sandy, the surrogate mother, with demons and very big secrets, seems to have alarmed Brooke about her daughter’s safety and happiness. She put her once wedded-husband on notice that she’ll be watching him and Sandy and warned him not to hurt her daughter Bridget.

“B&B” airs weekdays on CBS.If that wasn’t powerful enough, Brooke was confronted by her sister Katie and asked if she was lying and if her husband and father-in-law were planning to sabotage the fashion campaign. Brooke lied to her sister, but not easily. The torture she felt lying to her sibling and betraying her was evident on Kelly Lang’s gorgeous face. This is a woman who has redeemed herself in character and has earned her spot in history as one of Hollywood’s most outstanding actresses. Give these three ladies an Emmy and my New Year will be complete.