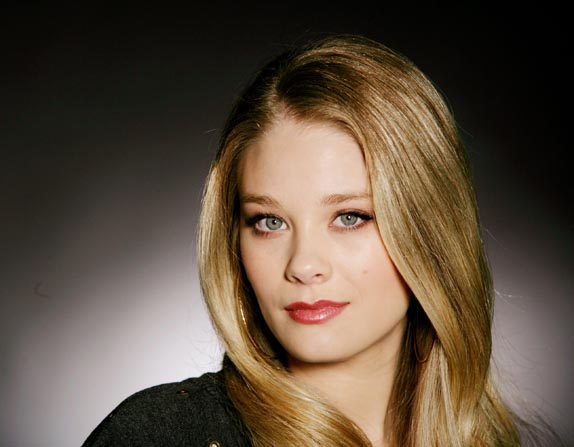 HOLLYWOOD —This week’s leading ladies gold standard goes to Jacqueline Wood-MacInnes (Steffy Forrester on “B&B”), a wonderful new young actress also on “B&B” named Kimberly Mutula (Hope Logan) and Julie Pinson on “ATWT” (Janet Snyder). These three beautiful ladies ended the week with a “What’s next?” scenario. We all knew Steffy would add Hope to her list of Logans to destroy, but Janet has an even greater dilemma. Two men are in love with her and she ended up finding out the paternity of the baby she is carrying.

Kimberly Mutula has recently joined “B&B” as Hope Logan. Executive producer and head writer Bradley P. Bell and famed casting director Christy Dooly saw something in Mutula that made her the perfect choice for the role of Brooke Logan’s illegitimate daughter by her son-in-law, skuzzy Deacon Sharpe. I now see what the two giants in the industry saw originally. Kimberly is a beautiful young actress who conveys a warmth and charm that is only eclipsed by her beauty. This week when Hope was suppose to be a sympathetic character who was falling in love with the handsome Oliver. This is truly the way anyone would expect one of Brooke Logan’s daughters to behave. Hope grew up with a mother who was constantly in perpetual love affairs and now she’s becoming her mother’s daughter. It’s brilliant.

While “B&B’s” Steffy is becoming her grandmother’s name sake. Queen Stephanie Forrester of Beverly Hills is undeniably the most powerful matriarch of any family. However, every generation has a new budding vixen on soaps, and this Generation XY has Steffy. She is portrayed by beautiful and enigmatic actress Jacqueline Wood-MacInnes who makes Steffy unforgettable. This week the devious spawn of Ridge and Taylor Forrester found out that Bridget slept with another man. Leave it to Steffy to try to use that indiscretion to bring Bridget’s Brooke down. Steffy also has decided she’s going to use Oliver to make her step-sister Hope unhappy. The actress is incredible in scenes that are considered high-drama and melodramatic. She’s beautiful but also very captivating and I can see why she’s making the role of Steffy so exciting.

Julie Pinson who portrays Janet on CBS’s “ATWT,” is doing an incredible Emmy-worthy job as the second wife of Jack Snyder. Janet has to live with the fact that her husband is still in love with his ex-wife the sexy Carly. While also trying to keep handsome Dusty played brilliantly by Grayson McCouch at bay. Dusty has poured his heart out to Janet and told her how much he loves her. She however is more worried about her daughter Liberty who has a rare form of cancer and needs a donor in order to live. Janet was so excited when she found out that she was pregnant, because her baby’s life may also mean saving her teenage daughter Liberty. However, the joy just doubled when she found out that her husband Jack, not Dusty was the father of her baby.

Pinson’s ability to be so empathetic and caring as Janet is mesmerizing to watch. The beauty who portrays a mother who puts her daughter’s life before her own happiness has really grown as an actor. From day one when Pinson appeared on “As The World Turns” fans fell in love with her and the character of Janet. The actress is not only ready for her close up, but she deserves an Emmy for her portrayal of Janet Snyder on “ATWT.”