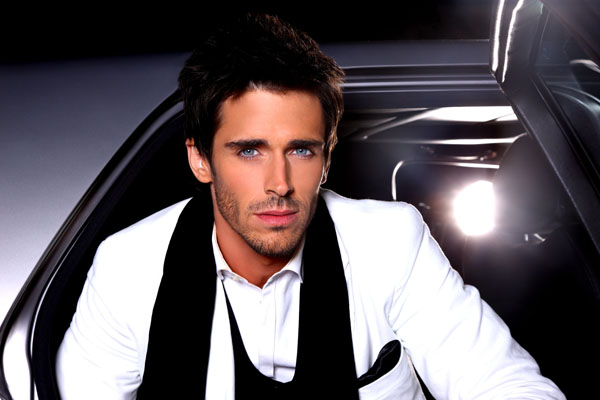 HOLLYWOOD —This week’s Leading Men Gold Standard goes to three actors who saved a damsel in distress. Joshua Morrow who portrays Nick Newman is the most outstanding young actor on “The Young and the Restless,” Grayson McCouch as Dusty Donovan is one of the most complex performers who makes Dusty simply a charismatic figure on “As The World Turns” and blue-eyed hunk Brandon Beemer who portrays Owen Knight plays his role with great intensity and an air of fun. This week all three actors’ characters saved someone and caused problems without meaning to. Nick’s salvation of his ex-wife may cause problems for his current marriage, Dusty played the romantic and swept Janet and female viewers off their feet, while Owen slept with his son-in-law’s wife.

Nick has been in love with two women for years now. Joshua Morrow has told Canyon News this very thing on several occasions and the man who make Nick Newman flesh and blood on “Y&R” has his hands full with a great new storyline that super-scribe Maria Arena Bell is going to give us very soon. Nick finding out his evil brother Adam was responsible for bringing the predator physician Dr. Taylor not only to Genoa City but also to the lives of Ashley, Sharon and the entire Newman family. Morrow is simply divine in the way he downplays scenes and inevitably steals them from his costars just from pure talent. He’s a very unselfish actor, who knows when to defer the scene to his acting partner and his scenes this week with Sharon Case and Michelle Stafford were complex but brilliantly crafted by the writers and acted by the great Joshua Morrow himself.

Dusty has been sitting on the sidelines of love for months now. However, his portrayer is no stranger to the millions of female fans who lust after one of the most handsome men in television today. Grayson McCouch is one of the most giving actors, who makes his scenes with all of Oakdale’s ladies crackle with intensity and chemistry. The actor is almost oblivious to the on-screen presence he exudes, because he’s too busy being what he is naturally, a brilliant actor. When Dusty asked Janet this week to marry him, so he could take her away from the unhappy marriage she’s in, every female viewer dreamed that he was talking directly to them. He’s so enigmatic, he does so without trying. His delivery as an actor is always in perfect succinct timing. His mastering of the craft is unparalleled by anyone on-screen today. With “ATWT” winding down for what will be a very poignant few months for viewers. Every female viewer of the show wants to see Dusty with every beautiful young leading lady the show has.

Bradley P. Bell is one sharp writer. With Owen and Jackie in such a good place in their marriage, they needed some shaking up. He did just that. However, only Brad could realize that the best potential threat to Owen and Jackie’s marriage should be someone like Bridget. Someone who can really cause pain and suffering, as only a relative can do. The fact that Owen has not been looking for an affair was evident. However, when a lady is in such distress as Bridget was this week, how could any red-blooded American man say no? Owen proved, he could not. Beemer played it as a man who was consoling, not a man on the make. Great idea! Great choices this man makes as an actor and viewers of “B&B” can expect fireworks to ensue.

Independent Film Festival Pops Up In The Valley

Mayor Eric Garcetti Authorizes Water & Power To Be Shut Off