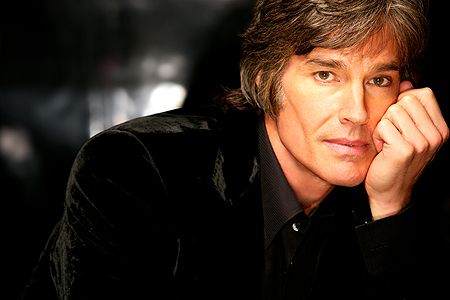 HOLLYWOOD—This week’s Leading Men Gold Standard goes to three talented and handsome actors, who work at the William J. Bell Studios at CBS TV City in Hollywood. Some of television’s greatest stars have hailed from the famed studio. This week, we choose Ronn Moss, who portrays Ridge Forrester on CBS’s “The Bold and the Beautiful”; his costar Adam Gregory, who portrays Thomas Forrester; and Joshua Morrow, who portrays Nick Newman on “The Young and the Restless.” Each man conveyed being at wits end this week with aplomb.

Ronn Moss has played Ridge for a quarter of a century. However, Moss has the knack of making it seem fresh and his frustrations as Ridge of being in love with and married to Brooke seem to put Ridge at the end of his rope this week. Brooke sides with stepson Thomas, which causes Ridge great turmoil. First he learned just last week that Thomas and Brooke kissed on the Forrester private jet, then he learned that Brooke decided with Thomas to keep the Taboo Fashion line going, even though Ridge ordered the subsidiary of Forrester Creations to be canceled. Whenever we see Ridge fed up, we see Moss’s best performance. This week was no different.

Thomas Forrester is played by the handsome young star Adam Gregory. Thomas is truly the son of Ridge and Taylor. He is as stubborn as his father and as defiant as his mother. However, the defiance against his father Ridge is destined to land him in hot water and fans can’t get enough of this storyline. Gregory’s ability to join “B&B” and immediately become a major part of the fabric of the series without any problem is amazing. The series is a fast moving and groundbreaking drama, and Adam Gregory’s doing an incredible job in the role.

Joshua Morrow is one of “Y&R’s” most exceptionally talented leading men. The handsome actor who portrays Nick Newman is one of the most solid family men in Hollywood. However, Nick is drawn into one family disaster after another. This week Nick found out that his father married the woman he’d been sleeping with himself. He also learned ex-wife Sharon broke the law in an effort to find his brother, who she’s having an affair with. Also, Nick is still reeling from the windfall of winning $500 million from his billionaire father in a lawsuit. Morrow’s head never stops turning when he reads his scripts every day, and female viewers’ heads turn whenever Morrow as Nick is on screen.