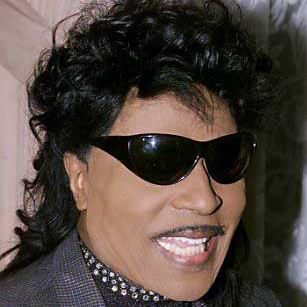 HELLO AMERICA!—There’s no one like Little Richard and frankly we don’t need a copy because one is enough! Enough said!

MSJ: Were you always considered outrageous as a kid?

LR: Well, I was different that’s for sure. I would say exactly what was on my mind. And most of the time the elders didn’t like or appreciate it. But I didn’t care, I just felt it important to be me and not hold back.

MSJ: In the beginning was it tough creating an audience for the kind of entertainer you are?

LR: The people loved the way I played the piano and sang my songs, but it took time for them to get use to me wearing jewelry and the colorful suits and things. And oh yeah, the way I fixed my hair. I felt I had to create a wild and extravagant image, after all that’s what show business is all about. And it worked. The things I’d say and do on stage surprised a lot of people, but they kept on comin.’

MSJ: Was it especially tough for you to break into the business?

LR: Possibly a little compared to guys like Duke Ellington, Louis Armstrong and Cab Calloway, hey you know the names. They were the traditional dudes in every way. Almost like royalty and when I came on the scene it caused a lot of eye raising because, let’s face it, I was different. And the people dug it and there were packed houses whenever my name was on the marquee. It’s all about the money, baby. You learn that very fast in this business.

MSJ: What has been the most troubling experience in your career?

LR: Stopping people from stealing my money! When I found that millions of dollars were not going into my bank account, but somebody else’s, I freaked out. I was forced to sue a few people. It’s important to understand that it’s not “only” show business, but show “Business” and if you don’t understand that, you’ll end up collecting welfare.

MSJ: So you feel that you trusted too many people through the years?

LR: You got that right! When you out there hearing all that applause and people tellin’ you how great you are, nothin’ else matters, but basking in the sun of approval, if you know what I mean. When finally reality hits, for most people, it’s too late. I was lucky.

MSJ: You were part of the ministry for a while, was it something that came natural to you?

LR: When I was a small boy I’d go to church and give little sermons. I loved the gospel and found a lot of peace and joy watching people enjoying what I had say about my love for the Lord. It came natural to me; it was like singing.

MSJ: Is there one special memory that makes you feel good and lucky being who you are?

LR: Being around the Beatles when they began their career. I knew in my gut that they were special in every way. John and Paul especially were extremely gifted musicians. And they asked a million questions about music and writing songs. We spent a lot of time together and I still feel excited when I remember how they were during those earlier days in Germany where we first met.

MSJ: Who is Little Richard today?

LR: An older man who is trying to stay alive. And who knows I might have one more song to sing.

The Bellwether Closes Its Doors