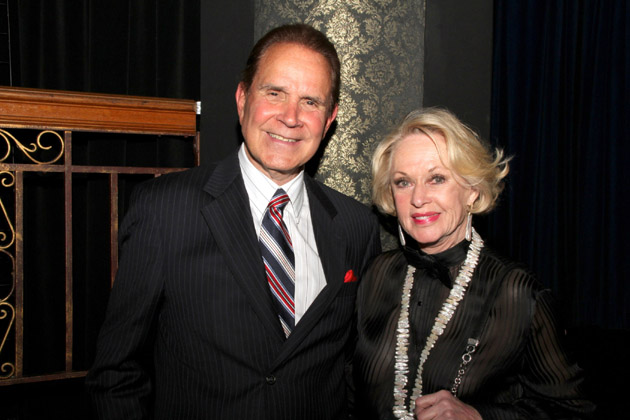 HOLLYWOOD —In the now popular tradition of the Legend Series at the Magic Castle in Hollywood, friends, colleagues and fans such as Richard Chamberlain, Tippi Hedren, Jon Voight and more gathered on Sunday, May 23, for a evening with Rich Little and his art. Little is best known as the master mimic of over 200 voices; however, in addition to his spot on impersonations of legends such as Jack Benny, George Burns, John Wayne, Humphrey Bogart and five presidents (Ford, Carter, Reagan, Bush, Sr, and Clinton), the two-day engagement in the Palace of Mystery Theatre at the Magic Castle also featured Mr. Little’s artwork both onstage and in The Castle’s Inner Circle. Sunday night’s engagement featured a tribute to the Legendary Ladies by British Sensation, Toni Morrell, prior to Rich Little’s tribute in his art to the Legendary Men and their voices.

During the unique performance Q&A, hosted by Karen Cadle, Little offered a glimpse at a lesser-known side of the talented comedian. Amazing life-like depictions of the famous he has so masterfully impersonated over the years, done in charcoal on paper. Part of the evening included a special on-stage presentation of artwork done by Mr. Little to be presented to friends, Jon Voight and Richard Chamberlain, making a promise for the stage to the glamorous Ms. Tippi Hedren in the audience that she was next.

Little’s big break in the U.S. was in his early 1960s when he appeared on CBS’s “The Judy Garland Show.” Appearances on numerous TV variety shows such as “Ed Sullivan,” “Jackie Gleason,” “Glen Campbell,” “Dean Martin,” “Laugh-In” and “The Julie Andrews Show” followed. Rich had his own variety show in the ’70s. He also performed as guest host 12 times for Johnny Carson, and was named “Comedy Star of the Year” by the American Guild of Variety Artists.

Little has recorded nine comedy albums and starred in three HBO comedy specials, winning an Emmy, among other awards. He starred as Johnny Carson in the HBO movie “The Late Shift.” Daytime television appearances include “The Young and the Restless.” Primetime appearances include “Fantasy Island,” “CHIPS,” “Murder She Wrote,” “Hawaii Five-O,” “MacGyver” and “Police Woman.” Little’s expert impressions have also been used seriously, as when he stepped in for such stars as David Niven, Peter Sellers and Gene Kelly who were unable to do their own re-dubbings on motion picture soundtracks.

Over the years Rich Little has been active with children’s charities and he was co-host of the Canadian division of the “Children’s Miracle Network.” He was inducted into the Miami Children’s Hospital International Pediatrics Hall of Fame for his tireless efforts in fundraising on behalf of children. In June of 1998 Rich Little added his star to the Canadian Walk of Fame to go along with his current star on the Hollywood Walk of Fame.