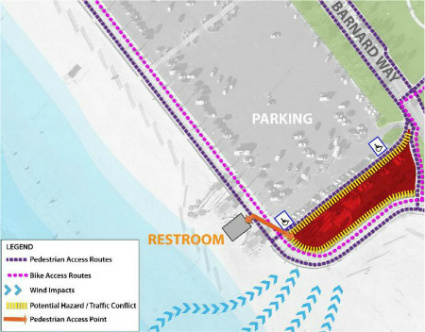 SANTA MONICA—On Tuesday, January 10, the Santa Monica City Council spent about an hour and a half addressing multiple assertions made by irate residents, based on their own observations, about the site of a proposed 20,000-square-foot multi-use playground close to where they live near the city’s southern border with Venice Beach.

Though they were not against the idea of a playground for children with all abilities, a number of Sea Colony One condo residents and locals, who live on Barnard Way across the street from the project site, said children who get away from their parents or try to reach the bathroom on the west side of the nearby bicycle path will be plowed into by out-of-control bicyclists. Councilmember Bobby Shriver brought this issue to the forefront of attention when he related how he almost recently killed a bicyclist who grazed his child while at the Annenberg Community Beach House children’s play area.

A number of councilmembers related that bicyclists hitting pedestrians is an issue throughout the city that should be addressed separately at a later time. Until that happens, Recreation and Parks Commissioner Phil Brock said this could be remedied by yellow signs due in the summer that will require passing bicyclists to slow down. Brock said he could also look into signs requiring them to dismount in the area, as they are required to do within 50 feet from the Manhattan Beach Pier.

Karen Ginsberg, the new community and cultural services director, added that signs will be posted at the playground requiring adults to accompany children at all times. She said the signs and a double 42-inch-tall chain-link fence surrounding the area should be sufficient to prevent children from wandering off for too long without their parents noticing.

Another concern voiced by locals is that parents who stop on Barnard Way or make U-turns on nearby residential driveways to drop off their children at the playground, in order to avoid paying parking lot fees, will endanger public safety by blocking vehicle and pedestrian traffic. They also maintain that parents who choose to park there will avoid the crosswalk and cross in the middle of the street to and from their vehicle, endangering their own children.

Christopher Knauf, who serves on the Disabilities Commission, said that the commission recommended to the playground’s design team that more than a minimum number of Americans With Disabilities Act (ADA)-complaint parking spots be made accessible to disabled park visitors so that they are not endangered by nearby traffic. And the design team has already taken this into consideration. Ginsberg added that parking for drivers with disabled placards can park for free.

She said that although traffic issues will exist on Barnard Way whether or not the playground is built, her staff could look into moving the parking lot’s entrance to the north to avoid the traffic flow to the east. Though this would require additional funding.

Locals further made the assertion that the playground could attract gang members and transients from nearby Venice Beach, who would use it respectively as a hangout spot and shelter from the elements. They maintained that such individuals would bring with them violence, public sex, urination, defecation, garbage, fireworks, partying, public drunkenness, broken bottles, drug materials and cigarette butts.

The possibility of either of these scenarios was shot down as unlikely. But Ginsberg said she has been talking to local police to see if they could do patrols of the area when they lock down parking lots in the evening. Shriver suggested that this could take place for the first six months, then the energy of the parents could take over. In addition, Ginsberg said the council could pass an ordinance requiring that the playground close at 10 p.m.