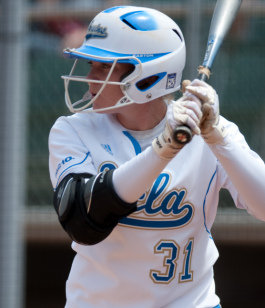 WESTWOOD—It’s a new year, but the UCLA softball team once again find themselves in a familiar position. Last season the Bruins were ousted in the Super Regionals by Missouri after they forced a game three, and for the second straight year the Bruins are on a roll heading into the Super Regionals in this postseason.

Last weekend the Bruins won all three of their regional games in both convincing and heart-stopping fashion. The first game against Saint Mary’s was a one sided affair, compliments of sophomore Dani Yudin. Gionna DiSalvatore started things off in the first inning with a homerun to give UCLA a 1-0 lead and in the second Yudin followed her up with a long ball of her own to put the team up 2-0. After a quiet third inning the Bruins exploded in the fourth with three runs, highlighted by a two-run bomb by senior Kaila Shull to give the Bruins a commanding lead of 5-0, but the Gaels wouldn’t go down quietly.

Saint Mary’s temporarily got back in the game during the fifth by quickly putting up four runs to bring the Bruins lead down to one, but that was the lone bright spot for Gaels because UCLA dominated the rest of the way. With a player on base, Yudin sent another pitch onto Sunset Boulevard to put her team up 7-4 and Samantha Camuso gave the Bruins even more breathing room after Marti Reed brought her home with a single. In the sixth even more insurance was provided with another three-run inning, and Camuso homered one more time for good measure to leave the score at 11-4.

The next game provided a much stiffer challenge for the Lady Bruins. San Diego State was determined not to let UCLA simply waltz into the Super Regionals and came pretty close to succeeding. The Aztecs got on the scoreboard first thanks to an error by the infield, but the 1-0 lead did not last long. In the third inning senior and National Player of the Year Finalist Megan Langenfield had enough and sent a pitch into orbit to even the score at one apiece. The only thing better than a good thing is more of a good thing and Langenfield decided to follow up her homer in the third with another one in the fifth. Camuso joined in on the action with a home run of her own in the sixth to give the Bruins a 3-1 lead. With only one more inning and sophomore Aleah Macon shutting down the Aztec offense, it looked like another victory for the Bruins, but San Diego State struck back with two runs at the top of the seventh tie the game. The team didn’t buckle, but instead rose to the occasion. After the bases were loaded when the Aztecs wisely decided to intentionally walk Langenfield, Andrea Harrison was able to get a ball past the first baseman to bring B.B. Bates in for the walk-off victory.

Undefeated on the day, the Bruins only needed one more victory to become the Los Angeles Regional Champions and the opponent who stood in their way was the Fresno State Bulldogs. The Bulldogs jumped out to an early 2-0 lead, but the only problem was that there were still six innings left and the Bruins made sure they used them. Following a Dani Yudin walk in the second inning, Camuso sent a pitch over the fence for the third time that day to bring UCLA back in the game. Both teams went through three scoreless innings, but in the sixth inning the game started picking up for the Bruins. Harrison launched another ball into speeding cars below on Sunset to bring in three runs and freshman Devon Lindvall also scored to give UCLA a 6-2 lead. Even though the game was very much over, Julie Burney added yet another home run to make it 7-2 and secure the Regional Championship for the Bruins.

On May 29, which is this Saturday, the Bruins will grace the field of Easton Stadium at least two more times to host Louisiana-Lafayette in the Super Regionals. The winner of the series moves onto to the College World Series on June 3, and will face the team that will come out on top between Florida and Arizona State.