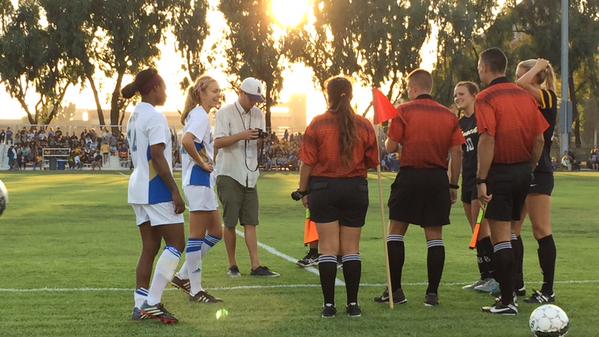 The game-winning goal came from Long Beach State senior Vania Robles at 66:52 after a UCLA turnover in the back. Robles poked the ball in the net off a cross from teammate Ashley Gonzales.

UCLA had two great chances late in the game to equalize the score, but the 49er’s goal off a header from senior Kodi Lavrusky in the 73rd minute was called off due to an offsides call, and junior Amber Munerlyn had a great shot on goal, but hit the crossbar in the 83rd minute.

“If you look at the stats, I think we should have won, but I don’t think we necessarily deserved to win,” said UCLA head coach Amanda Cromwell. “We didn’t have the fight and the grit that we needed to have. It turned into a grind-it-out kind of game, and we didn’t grind it out. When you watch the last 15 minutes, there were multiple chances.”

The Bruins, who lost just one game all season a year ago, their first chance to score a goal in the 19th minute with a shot by senior Kristiana Konkol-Mroczkowski that was saved by the Beach’s goalkeeper, Ashton McKeown.

Lavrusky had a shot on goal in the 26th minute as well, but it skimmed just over the crossbar.

UCLA had 10 total shots—three on goal— compared to Long Beach State’s four. Only two of the Beach’s shots were on goal.

Redshirt junior Cassie Sternbach played the entire 90 minutes for the Bruins and played in her first career game in the UCLA blue and gold.

“It’s early, and we can learn from this and move on to Sunday,” said Cromwell.

UCLA will look to regroup on Sunday, August 23, when it travels to San Diego for a 5 p.m. kick-off at Torero Stadium.