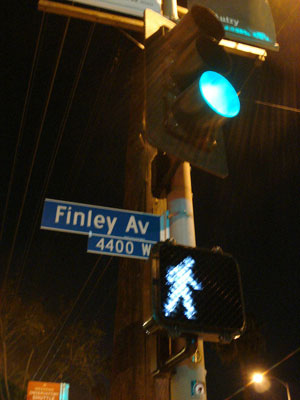 LOS FELIZ—On a sunny Tuesday afternoon in Los Angeles, Los Feliz turned the switch on its newest traffic light at Finley Avenue and Hillhurst. The event was attended by Councilmember Tom LaBonge, members of the Los Angeles Department of Transportation (LADOT) and the Community Redevelopment Agency of Los Angeles (CRA). Father Christopher Kelley of Finley Avenue’s St. Mary of the Angels Anglican Church was also on hand to “bless” the new stoplight as well as five year old Mya Rose Pecchia who officially flipped on the switch.

The process of installing the traffic light was a project that came to fruition after many meetings regarding funding with LADOT, CRA, as well as concerned residents of the high-accident intersection. Stephanie Mar Press Deputy for councilor LaBonge told Canyon News that the most important reason for installing the light was the safety of pedestrians, six of whom have been struck by motorists at the intersection previously, along with 31 reported car accidents since 2000.

In conjunction with the installation of the new traffic light, an uncontrolled crosswalk at Clarissa Avenue and Hillhurst was removed. According to Mar, a small amount of residents were concerned about the loss of the two parking spaces due to the new traffic light, but she explains that ultimately the reduction of speeding, accidents and greater safety of the community was a more pressing factor. In response to the two spaces lost, the removal of the uncontrolled crosswalk resulted in the creation of four new curbside spaces which should make up for any lost parking spaces due to the new traffic light.

The much needed light is now fully operational and should help to greatly improve the flow of both traffic and pedestrians. Rita L. Robinson, General Manager of LADOT who worked on the project in a press release noted that LADOT was pleased to have been a part of the process so that both “”˜Los Feliz residents and visitors alike can cross at Finley and Hillhurst Avenues safely.’”