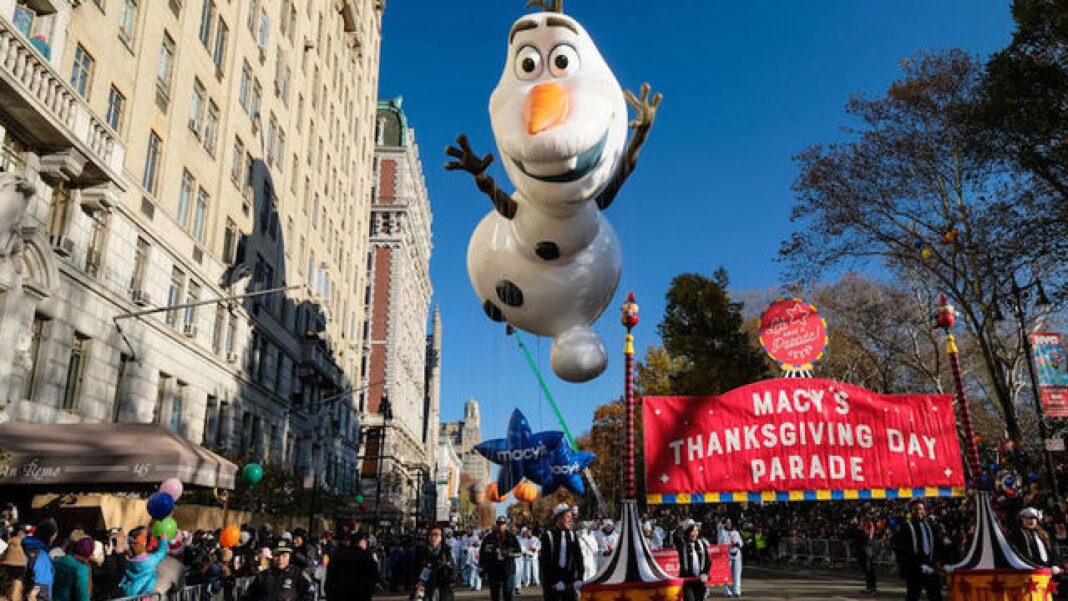 HOLLYWOOD—In just two days, Thanksgiving is upon us. This year, everything is different including New York City’s iconic Macy’s Day parade, which has been scaled back once again over COVID concerns. The parade will still be broadcast to millions of Americans on television November 26, however, out-of-towners and New Yorkers hoping to catch a glimpse in person, will be out of luck.

Nothing is normal this year, so no, procession of floats and performers along Central Park West, to ensure social distancing. So Macy’s decided relegating floats in front of Macy’s flagship store and perhaps even cutting the number of participants down to 25 percent. Due to the recent surge in cases it can be pared down even more. Performers include Lauren Alaina, Sofia Carson, Tori Kelly, Patti LaBelle, Matthew Morrison, Leslie Odom Jr., Keke Palmer, Dolly Parton, Pentatonix, Bebe Rexha and Jordin Sparks. The casts of “Ain’t Too Proud-The Life and Times of The Temptations,” “Hamilton,” “Jagged Little Pill” and “Mean Girls” are also set to be showcased.

So if your planning on having a huge family gathering, it’s not allowed. Everyone is also limited to a small gathering, depending on the states, some only 10 or less family members, preferably in the same household. If you were planning on dining out, not in Los Angeles, outdoor dining will be banned for the next three weeks.

It’s still a day for many blessings. Turkey, stuffing, yams, mashed potatoes, cranberries, and pumpkin pie-are all commonly associated with giving thanks. On this holiday, a Thanksgiving meal is prepared with all the trimmings; families gather together and talk, while others watch the parade or watch a football game.

The 94rd Annual Macy’s Thanksgiving Day Parade, marks the start of the holiday season, featuring giant helium balloons, floats, marching bands and of course celebrity appearances, and the one-and only-Santa Claus, of course. This year, however, will be for television audiences only. Television has been good to New York’s Governor Andrew Cuomo. The luv gov, besides releasing his latest book titled, “American Crisis: Leadership Lessons from the Covid-19 Pandemic,” also won an Emmy, the Founders Award 2020 on November 23.

The award was in recognition of his leadership during Covid-19 pandemic and his masterful use of briefings to inform and calm people around the world. Over 59 million people tuned in every day. It’s no secret, that I’m an admirer and have been asking the governor to meet up for dinner.

Why are people rushing the holidays? This year people began putting up their trees in early October. I’m very serious. While it’s true that some people skip over Thanksgiving and go right from Halloween to Christmas. This year, they didn’t even wait after Halloween. To each his own, however, enjoy each holiday. This year, everyone will be shopping online. So what is the hot item everyone wants? It’s the PS5. It literally sold out in seconds, crashing the Walmart and Best Buy websites.

While, Thanksgiving may be full of feasts and festivities, it is important to remember the true meaning of the holiday. It’s about gratitude, and being thankful. It’s a day for everyone to reflect upon themselves and count their blessings. We all worry and stress about so many things on a daily basis and let obstacles and small difficulties in life consume us with worry, it’s a day to reflect on everything we have in life. Having gratitude not only shows appreciation, but will help us become happier, more satisfied, healthier, and make us better people. This year it is day to appreciate what we have.