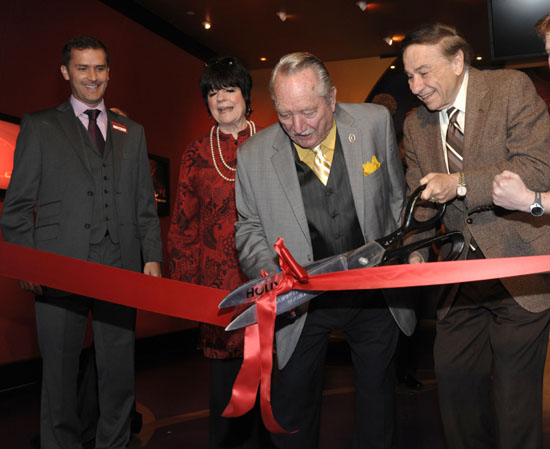 Sherman, who composed some of moviedom’s most iconic tunes, from “Mary Poppins” to “Chitty Chitty Bang Bang,” as well as “It’s A Small World (After All),” was on hand with friend, colleague and co-composer Milt Larsen (whose own star on the Walk of Fame can be found outside the front door of Madame Tussauds) to cut the ribbon for Tussauds “Celebrity Awards Hall,” located on the ground floor of Madame Tussauds Hollywood. Also on hand for the opening was JoAnne Worley and Adam Wylie who star in the Sherman/Larsen collaboration “PAZZAZZ!” featured as part of the “A Supercalifragilistic evening with Richard Sherman,” which opened last weekend (February 26 and 27) at the famous El Capitan.

This marks the first full stage musical production done since its renovation in 1991. The El Capitan began as a live theatre in 1926. It boasted a 120-foot stage, and featured plays on stage with stars that included Clark Gable, Buster Keaton, Will Rogers, Douglas Fairbanks, Jr., Henry Fonda, Lon Chaney, Jr. and Jason Robards. It was a ”˜legitimate’ theatre until 1942, when it became the Paramount movie theatre.

Walter Painter has come on board as director/choreographer for “A Supercalifragilistic evening ”¦” His work in the theater includes the musical staging for the Broadway, National and London Companies of “City of Angels,” and choreography for “Leave It To Jane” at the Goodspeed Opera House. He has also directed and staged companies of “Camelot,” “Hello Dolly!” “Cabaret,” “Once Upon A Mattress,” “Annie Get Your Gun” and “Applause.”

Madame Tussauds is located on Hollywood Boulevard next to Grauman’s Chinese Theatre. Forty of the Madame Tussauds Hollywood figures are OscarÂ® winners and winners of hundreds of other major awards, including 47 Golden GlobeÂ® Awards, and among the figures who have won awards are Julia Roberts, Tom Hanks, Meryl Streep, Morgan Freeman, Nicole Kidman, Denzel Washington, Angelina Jolie, Halle Berry and classic stars, such as Bette Davis, Paul Newman, Kate Hepburn, Bob Hope and Audrey Hepburn. At an average cost of $300,000 each, the world famous Madame Tussauds figures are in a class of their own and their precision, exactness and life-like qualities have never been more fully and artistically realized than at Madame Tussauds Hollywood.