“How does being a patriot in trying to show pride in your country, how is that inappropriate? To my knowledge Trump is not a logo, it’s the last name, it’s just our President, you can’t claim the President is a logo, sports team, or affiliated with any gang,” said Mueller to YourCentralValley KSEE.

Mueller is a member of the Valley Patriots, whose group agreed to wear their MAGA hats to school on February 20 even though they were previously told not to by school officials.

Canyon News reached out to Chief Communications Officer for the Clovis Unified School District, Kelly Avants who said she was glad to have the opportunity “to clarify what is being misrepresented about our dress code.”

“You may be encouraged to find that our hat policy at Clovis North is simple and straightforward in only allowing hats that contain a school logo or activities. Because the hat didn’t meet the above-mentioned criteria it was out of the dress code, no other evaluation of its contents was made. While I can’t speak to Ms. Mueller’s specific discipline file, I can tell you that any student who is wearing a hat that is out of the dress code would not be sent home,” said Avants to Canyon News. 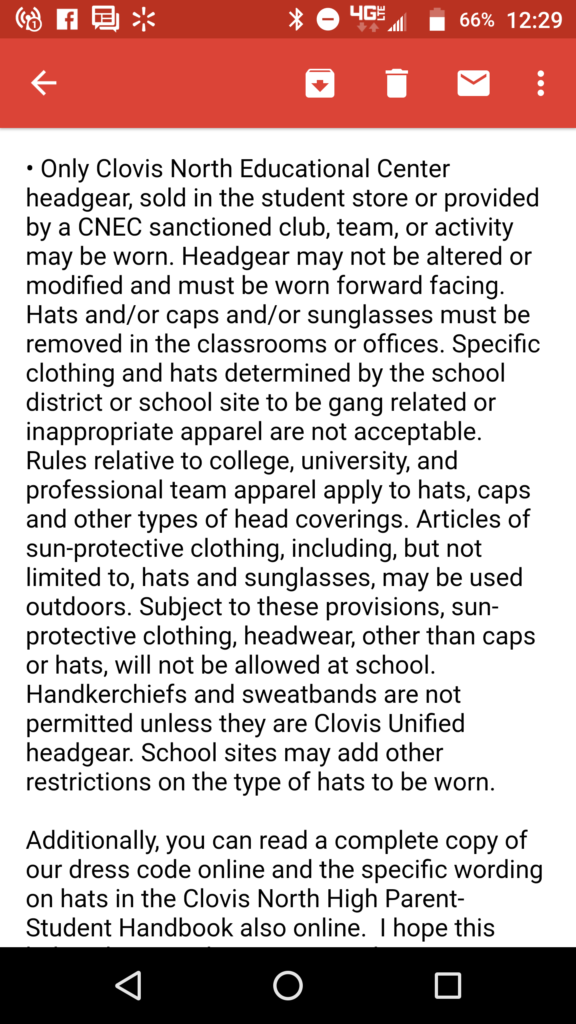 “Just wanted to say a HUGE thank you to Fox News and Laura Ingraham for having me on tonight. I never, in my wildest dreams, would have imagined that my stance could get me where I am now. I am so grateful to Ben Bergquam and the Valley Patriots for standing with me. I am also grateful for Mary Beth Wynn and the Fresno County Republican Party. I look forward to rallying again and continuing to fight for the rights of conservatives moving forward. God Bless the supporters. God Bless the haters. Good night! #MAGA,” posted Mueller on her Facebook page.