UNITED STATES−On Friday, December 11, National Coalitions for Women For America First, headed to a march in Washington D.C. to  the governor’s mansion about election integrity. 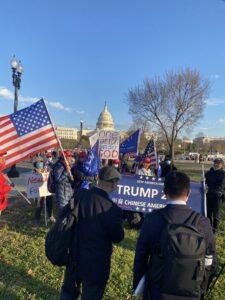 The Million MAGA March was expected to bring 17,000 Trump supporters. The United States Department of Interior issued permits on December 10 and December 11, at Freedom Plaza with 15,000 people expected in attendance. The permit was last from 12 p.m. to 6 p.m.

According to the permits, security was scheduled to be on-site from 6 p.m. to 6 a.m.

The march began at 5:30 a.m. with attendees expected arriving between 11 a.m. and 12 p.m. Music played as the crowd commenced. Introductions were made by Amy and Kylie Jane Kremer followed by the Pledge of Allegiance and the National Anthem was sung by Cjaye from The Deplorable Choir.

Participants marched from Freedom Plaza to the U.S. Supreme Court where the last of the participants spoke. The event was scheduled to end at 3:30 p.m. with break down beginning at 2:45 p.m. Extra face masks were available.

The #MarchforTrump is headed to the #GA Governor’s Mansion now!

We are not going to back down on our efforts to demand #ElectionIntegrity! pic.twitter.com/LYKxLVnx0L

Thousands of Trump supporters marching toward the U.S. Capitol on Saturday, December 12. Video shows a people marching in the cold in support of POTUS.