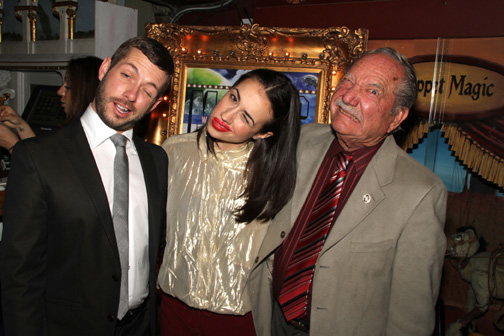 HOLLYWOOD —In the tradition of successful alternate egos such as Barry Humphrey’s Dame Edna or Carol Channing’s Cecilia Sisson, (and although slightly reminiscent of Judy Kaye’s hit “Souvenir”) based on the life of Flora Foster Jenkins, Colleen Ballinger’s “Miranda Sings” persona is a very unique and original concept devised by a very creative imagination. The lipstick smearing, epileptic-eyebrowed, crooked smiling Miranda is not to be missed. A character dedicated to those individuals who are stars, but only in their own minds. Even musical theatre fans seem to forgive Miranda for the blatant ravaging of Broadway standards such as “All That Jazz,” “Think of Me” and “Defying Gravity.”

Despite Ms Ballinger’s Mirandaesque vocal affront on time-honored tunes, there are moments when the audience gets a glimpse of the well-trained vocalist, behind the faÃ§ade. Besides, as the old saying goes, it takes talent to be that bad. However, guest artists be warned. To share the stage with Miranda is a guaranteed test to ones ego as the recently eliminated American Idol contender, Todrick Hall, and established Broadway star, Erich Bergen, can contest from Sunday’s experience.

Miranda put Hall through the ringer with a duet of “A Whole New World” from Disney’s “Aladdin,” while Bergen suffered the riggers of a Miranda style voice lesson. In reality, Colleen Ballinger is a classically trained singer and actress that has taken the globe by storm within the Internet medium with her wildly popular YouTube personality, Miranda Sings. The character is a satire of common YouTube videos featuring mediocre or even bad singers who film themselves singing as a form of self-promotion. Miranda sings comically off-key and, when confronted by viewers who actually take the videos seriously, uses the catchphrase “Haters back off!”

Ms. Ballinger’s character has an amazing fan base of well over 5 million views on YouTube, and has been appearing in venues in New York, Los Angeles, San Francisco, London and Australia. Special guests have included the Broadway casts of Mamma Mia, Billy Elliott, Bye Bye Birdie, Rock of Ages, Ann Hampton Callaway, Shoshana Bean, Daniel Reichard, Seth Rudetsky, Christopher Sieber and Scott Alan. Cabaret at the Castles producer, Matt Patton, remarked, “”¦ we must have had to turn almost a hundred (mostly young) people away. We are most definitely bringing her back.” Adding an extra element of entertainment to this evening was the magic of Colleen’s brother, Chris Ballinger, who has been performing magic professionally for over 15 years. Currently, he is the head of Media for Magicgeek.com, where he has produced over 600 magic demonstrational videos that can be viewed on the website and on Youtube. He released three magic tricks last year, Permanent, Anttack! and The Shark.

The Magic Castle is the undeniably the world’s most famous club for magicians and magic enthusiasts and home to The Academy of Magical Arts, Inc. The ultimate showplace for some of the greatest magicians from around the globe, the Magic Castle’s Inner Circle is becoming known as the West Coasts definitive location for talent, both established and recognizable or the soon to be.