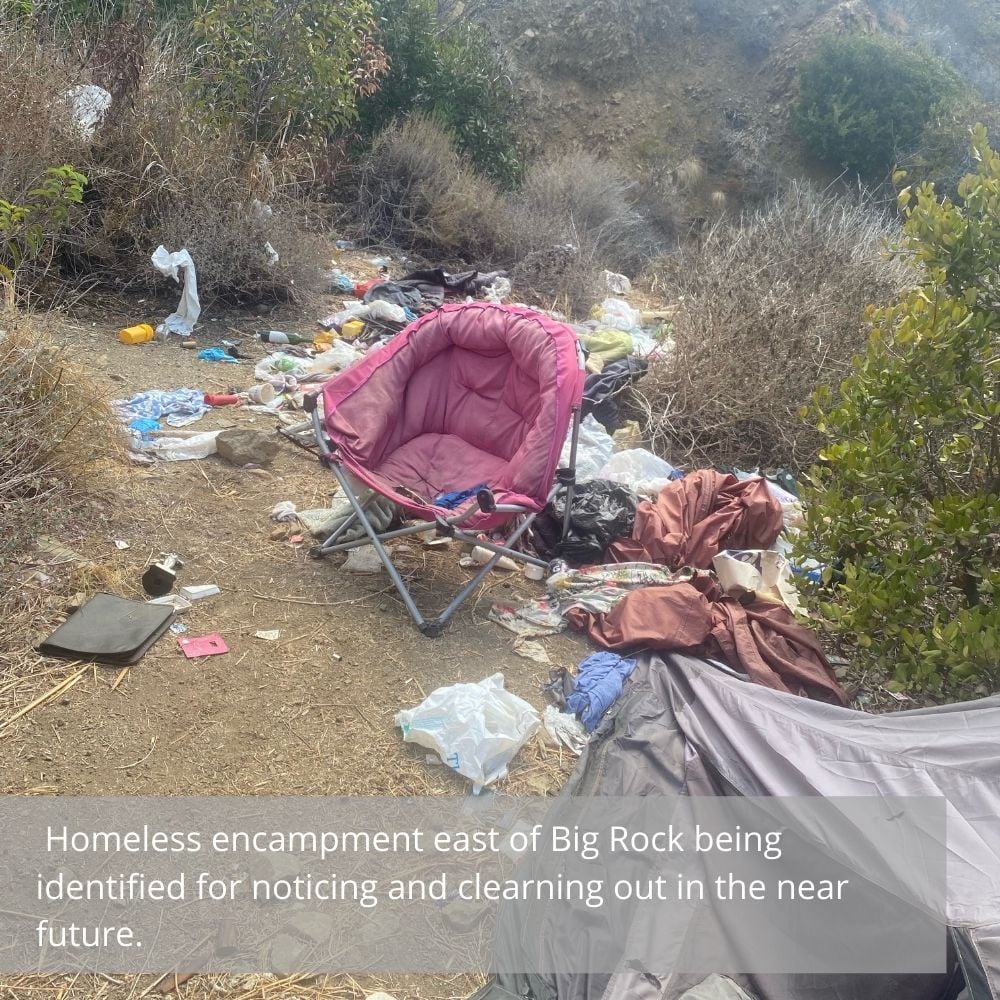 MALIBU—The city of Malibu updated on its website that a vast majority of the individuals camping in the Zuma Creek region have left, which includes two people who are now housed as a result of efforts from the Los Angeles County Sheriff’s Department (LASD) Homeless Outreach Services Team (HOST) in coordination with city staff.

The LA County Department of Beaches and Harbors assisted by removing debris left behind. Under the requirements of their 30-day protocol for clearing large encampments, the HOST Team will begin clearing the Zuma Creek area of encampments starting Tuesday, November 9. Once cleared, Malibu in conjunction with Beaches and Harbors will close the area in accordance with the City’s Very High Fire Hazard Severity Zone Ordinance.

On October 27, Malibu’s Fire Safety Liaison in coordination with LASD, followed up on issues about two possible encampments in the Big Rock area. As a result, it was determined that one of the encampments was old and abandoned. A person in a nearby area was arrested on an unrelated outstanding warrant. Public Safety staff will continue to work with and support the efforts of Deputies and the HOST Team to clear encampments from our hillsides.

On October 11, the Malibu City Council adopted a resolution that extended the declaration of a local emergency and continuing a program for reducing the risk of fires associated with individuals living unhoused and engaged in unpermitted and unregulated camping. The original Resolution was adopted on August 25, 2021 and declared that homeless encampments are prohibited in areas designated as Very High Fire Hazard Severity Zones (VHFHSZ), which encompasses the entire city of Malibu, and directed staff to collaborate with the Malibu Outreach Team, Los Angeles County Sheriff’s Department (LASD) and the LASD Homeless Outreach Services Team (HOST) to:

-Provide appropriate notification of the prohibition to those people living unhoused residing in encampments. Identify homeless encampments within areas designated a VHFHSZ, provide outreach, and offer available resources.  Homeless encampments offered outreach should be prioritized based on risk level associated with location, access, and terrain, and fuels.

-Ensure that the VHFHSZ remains free of homeless encampments, while also ensuring these efforts do not criminalize people who are living unhoused.

On August 25, in response to the adoption of the original resolution, City Public Safety staff met with LASD and HOST representatives to discuss a plan. HOST Team members worked with Public Safety staff to survey areas in the region and identify encampments that needed to be addressed. The most critical, in terms of fire danger, were in the canyons and the largest was identified in the Zuma Creek area. People who were living in encampments were advised that they could not stay and were advised of available housing and service resources, as required by the emergency declaration.

When clearing large encampments on public property, the HOST Team must follow a legal protocol, which takes 30 days. The protocol, or plan, must also be submitted to the Los Angeles County Chief Executive’s Office for approval. The HOST Team requested permission for a faster clean-up due to the fire danger, but were denied. Malibu contacted local representatives, including Los Angeles County Supervisor Sheila Kuehl, requesting to have this date moved forward.

Most of the encampments in other areas including Malibu Creek and private property on the east end of the city were addressed and are being monitored regularly by LASD, the HOST Team and the Malibu Outreach Team. As with any enforcement effort, what will pay off most are proactive and consistent actions. Residents are asked to continue to contact the city to report any concerns, and the city will continue to be responsive.

For more details about the city’s efforts to address homelessness and the threat of encampments, visit www.MalibuCity.org/Homelessness.