MALIBU—A hiker who got lost while hiking in Malibu Creek State Park was able to brave the wilderness and survive against the odds. Marcelo Santos, 30, went missing on April 1 and was found on Wednesday, April 4 at the base of a Salvation Army mountain camp; he was malnourished and suffering from a debilitating knee injury. A missing persons report was filed by Santos’ family on April 2 to the Los Angeles County Sheriff’s Lost Hills Station.

During a press conference at West Hills Hospital, Santos spoke about his ordeal. LASD SARS Operations Leader David Katz noted the Malibu Search and Rescue team received a call of a missing hiker at 4 p.m. They were able to ping the location of Santos’ cell phone where they found his backpack. Over 100 personnel were involved in the search to locate Santos. Santos was hiking in uncharted areas of the park, which made a proper search to locate him difficult. According to reports, it took rescuers two hours to get into the wooded region he entered.

“I want to thank God and all of my rescuers that made it to the scene and first responders,” said Santos. He noted he injured himself in the darkness and freaked out. He slid down a large rock, cutting the skin on his knee, and lost his bag with his cellphone, flashlight, food, water and clothing. 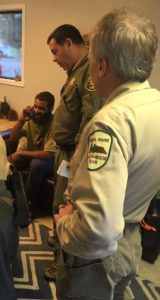 Over the next three days, Santos trekked slowly down the mountain. He slept in caves for warmth and occasionally drank from streams. He listened while multiple rescue helicopters soared over him, knowing that the dense brush and trees were keeping him hidden from sight.

Coming closer to the base of the mountain, Santos was able to hear the sounds of traffic, where he followed until he reached the Salvation Army camp, where he obtained water from the bathroom faucet. A staff member contacted rescue services, and he was immediately rushed to West Hills Medical Center for treatment.

“I walked down the camp and continued to yell [for help],” said Santos. He added, “I’m pretty comfortable [hiking]. I started [hiking] the Santa Monica Mountains four months ago.” Santos noted that he does plan to continue hiking.

Santos underwent surgery on Thursday, April 5 for injuries suffered and is expected to make a full recovery.