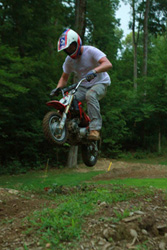 MALIBU—On November 16, a man was killed in a motorcycle crash in Malibu, according to the Los Angeles County Coroner’s Office.

The collision occurred at approximately 6:30 p.m. on the 29000 block of Grayfox Street, when the 35-year-old Malibu resident had been driving his dirt bike. Police suspect that alcohol may have been a contributing factor in the crash.

“The individual’s name is William Smith Corrodi,” Captain John Kades, of the Coroner’s Office, informed Canyon News.  “He was driving his  motorcycle on Grayfox Street when he crashed into a parked vehicle.  An examination of the victim has been done on November 18, and the cause of death was found to be multiple blood force traumatic injuries.”

Canyon News asked Kades if the possibility that Corrodi had been drinking at the time of the crash has been confirmed, and he stated, “The toxicology report will take about eight to 10 weeks to return to us, so we are waiting to determine the victim’s blood alcohol levels at the time of the incident.”

No further information on the accident and any other possible causes is available as of press time.