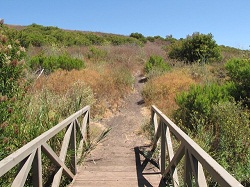 MALIBU—At a recent meeting of the California Coastal Commission, an appeal was heard from a local Malibu resident who had been rebuffed by the Malibu Planning Commission.

Clark Drane requested a permit to rebuild an aging staircase on his property, land that happens to be adjacent to a coastal bluff protected by current federal and state environmental regulations. The Malibu City Council granted a permit, despite the decision of the Planning Commission, and the Coastal Commission intervened.

Secondarily, Jimenez argued that the easement for the stairwell was a separate parcel connected to the residence of Drane and that rejecting the permit would introduce “takings” issues, referring to the “takings” clause in the Fifth Amendment of the US Constitution, an amendment construed broadly by Supreme Court precedent.

The Coastal Commission ignored these legal claims, again citing current regulation.  As Commissioner Sara Wan stated at the meeting, “The contention that somehow an easement confers a private parcel status is … something’s that very disturbing.”  Wan continued, “An easement does not confer separate property rights on it. To say an easement creates a separate parcel, frankly, would undermine all land use regulations.”

Although Malibu has witnessed a manifestation of the land-use debate, the argument of the Coastal Commission is one that has more general application nationwide. Land-use cases in many western states involve the question of ex post facto jurisdiction.  Many cases concerning ranches that predate the Bureau of Land Management, for example, result in ex post facto seizures of private land, which is then leased back to its former owners for a yearly fee.